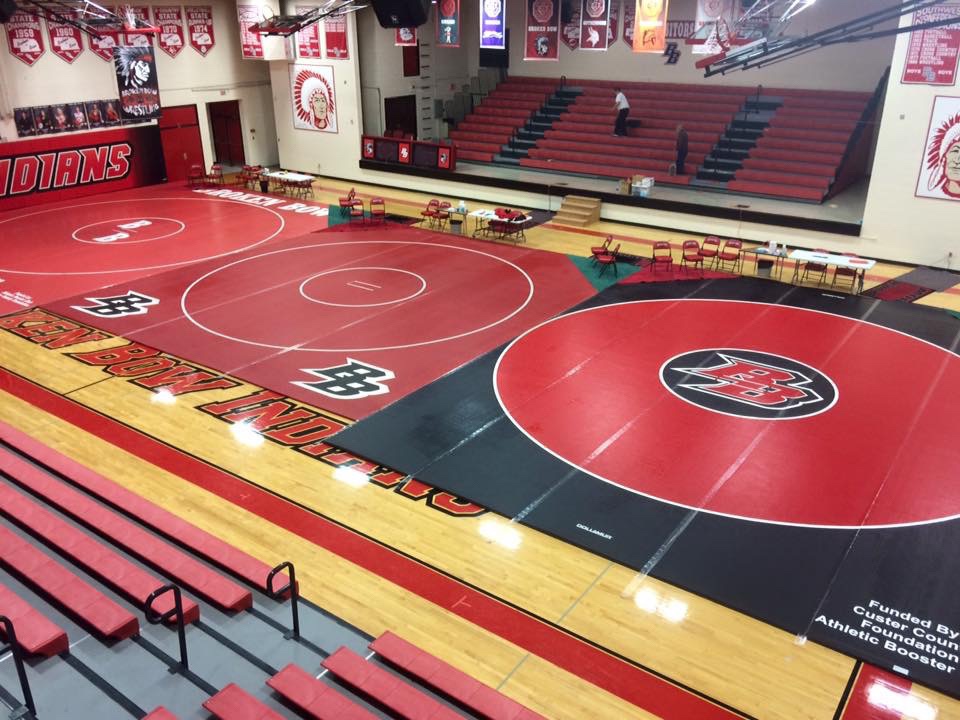 Valentine and Broken Bow are plenty familiar with each other after seeing each other in two tournaments and a dual this season. Their battles the past few seasons have all been fairly close so expect another good team race between the two at the district tournament. Broken Bow will have the ‘home mat’ advantage as they are hosting the district. The Indians also finished ahead of a short handed Valentine at Southwest Conference and captured their second consecutive state duals title. Both teams have a few wrestlers on the verge of qualifying so pushing those guys through to state will not only help their district title chances, but also get more possible state tournament points.

Bridgeport and Ord should have a good battle for the third-place spot. Ord lost two state medalists for the season, but could still qualify around 5-6 wrestlers. Bridgeport perhaps doesn’t get the credit they deserve as they wrestle out of state a few times and mainly stay out west. They qualified for the state duals and should not be overlooked. Bridgeport, along with some of the other far western Nebraska teams haven’t ventured too far east so there are a few weights where we are missing common opponents/results which makes this district the most difficult to predict.

Having the top two ranked teams in the same district translates into a high number of big-time matches. There are 25 ranked wrestlers in the district, the most of any in class C. There are tons of winning records and several weights where we’ll see close to double digit seedable wrestlers (120, 138, etc).

106:
Benavides has two wins by decision over Battershaw this season. Battershaw has a recent head to head win over Edwards. Edwards beat Fisher head to head. Russell has only taken two forfeit wins in duals since December, other than that he has not wrestled including at the State Duals. If he can make it back for districts he’d have a decent shot at qualifying.

113:
Top ranked Williams has a common opponent over returning qualifier Cluff. Cluff beat Bruns from Hershey 19-17 in OT earlier this year. Hilmer has two close wins over Bruns. Smith from Minden has a 4-1 win over Hilmer. We’ve seen several close matches between four of the wrestlers vying for the last three spots behind Williams. One thing to monitor is returning qualifier Cooper from Bridgeport has made 113 once this season but has been back at 120 since then. If he makes it back down, then he would have a good shot at qualifying.

120:
This one should be a fun one next week. Gaffney has a head to head win over Olson and common opponent criteria over Heath. Returning qualifier Boyce has been back and forth between 120 and 126 the last few weeks. If he goes 120 then he’ll likely be the second seed due to being returning qualifier. Olson has a common opponent over Musser with an OT win over Dalbey from class D Bayard who Musser split with. However, Musser has two common opponents over Heath from Minden and has head to head wins over Cooper and Gomez. Therefore, it appears as if Musser will be the third seed. We might see a few people bump up and try their hand at 126 based on how deep this weight is.

126:
Faulkenberry is a very big favorite to capture the district title at this weight. Returning qualifier TenBensel should enter as the second seed. Davis from Hemingford was a 2017 qualifier and has missed most of this season but he has been back in the lineup recently at 126. Frame from has wins over Kenney and Waitley. Not exactly sure if it will be Mundorf or Fowler for Valentine. Fowler did beat Frame head to head in a JV tournament, so while that will not count for seeding purposes, it helps clarify this weight for projection purposes. Will someone bump up from 120?

132:
Three ranked wrestlers at this weight and one spot up for grabs. Krolikowski beat Powers by two earlier this season and pinned Feldner at the High Plains Invite. Feldner has really been impressive this second part of the season, his only loss is to Krolikowski. 132 has opened up a bit for the fourth spot with season ending injuries to Rowse from Ord and Bruns from Herhsey. Buchheit has a head to head win over Palomo but has been out of the lineup the last three weeks. Lambert made the drop to 132 a few weeks ago.

138:
Returning medalist Widener should be the top seed at this weight. He has three wins over Perez, but hasn’t matched up with many others at this weight. McGinley appears to be the second seed as he’s beaten Ambler and returning qualifier Shiers both by fall. A McGinley/Widener finals match should be a good one. Ambler is 2-1 against Petska and has common opponent criteria over Perez. Shiers and Petska each have common opponents on each other, but Shiers has the better record and is a returning state qualifier so that should get him the third seed. Perez has wrestled up at 145 a few times and does have a win over Anderson so he may go up and try to duplicate that result. There’s a ton of quality wrestlers at this weight making it one of the best in the district.

145:
Olson should grab the top seed here as his only three losses on the year are to #1 White. Kluthe dropped to 145 in January and has beaten returning qualifiers Rogers and Anderson head to head. Menke has notched some quality wins this season and has split with Bryner. Rogers beat Anderson so it looks like he’ll be the third seed.

152:
Another ridiculous weight with a ton of potential state medalists. Ulmer and Battershaw have split matches. Hoos an Battershaw are 2-2 against each other this year. Hoos has two 1-point wins over Warren. Battershaw beat Daake 4-0 earlier this year. Daake has a common opponent over returning qualifier Shoemaker. The top six guys here would normally make it out of most districts. Perhaps we’ll see someone bump to 160.

182:
Ulrich had a comeback win to defeat Brooks recently, which should give him the top seed. Ulrich has beaten Hargett head to head and has common opponent criteria over Lang. Lang just notched a win over #5 ranked Allen. Sprinkle has common opponent over Hargett.

195:
Wood has only wrestled once since January 5th so his status for districts is uncertain. He does have a win over Fisher and will likely get the top seed based on record. Returning medalist Feldner has adjusted well after moving up to 195 and will likely see Fisher in the semifinals with the winner having Wood/Duda winner in the finals. Fisher has pinned Duda twice this season. The top four are pretty solid so it would take a pretty big upset from one of the other contenders to crack the top four. Duda has beaten White. White has a win over McDowell.

220:
Payne has head to head wins over Coley. Coley and Anderson both have wins over Knoles head to head. Both Coley and Anderson have common opponent against one another so the seed will come down to record. Regardless that one looks like a semifinal matchup as the 2/3 seeds. Knoles beat Tomsen 2-1 last weekend. There are some other wrestlers at this weight around .500 that could have a say in things with a good tournament.

285:
Drake has multiple wins over Hoevet and has beaten Perez as well. Perez has head to head wins over Gonzalez and Weiss. Hoevet has a win over Weiss as well. Weiss has wins over Bickel and Goodsell. Bateman is 2-1 over Goodsell and has head to head over Bickel. Gonzalez wrestled Drake to a 3-1 match at Southwest Conference so we’ll give him the nod for the 4th spot.