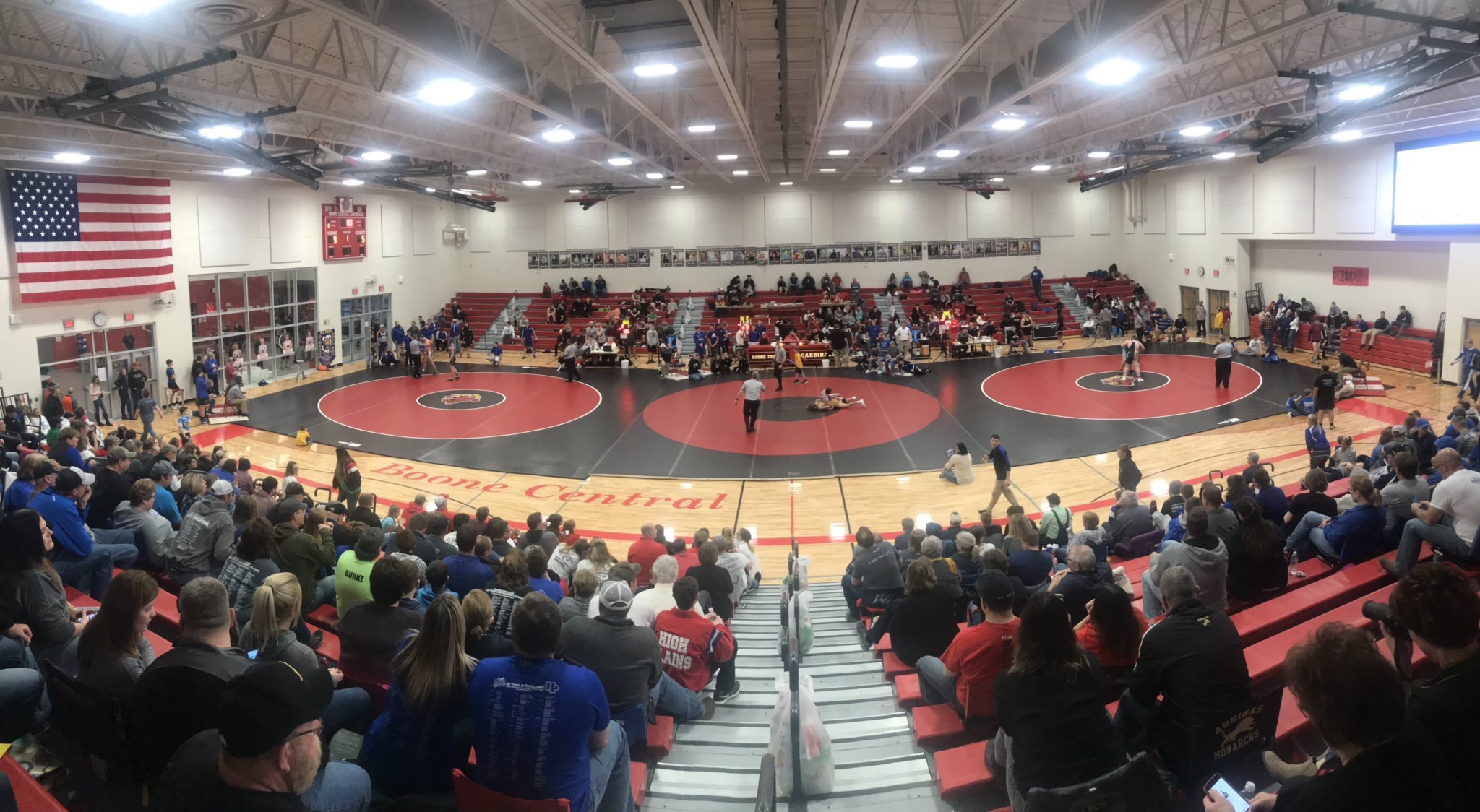 The team race here should be an excellent one between David City and Logan View. Both teams appear to be capable of qualifying as many as 13 wrestlers. The two teams haven’t met up throughout the season, but if they meet at state duals on Saturday that could really paint a clearer picture of where the two teams stand. Logan View has finished ahead of a tough Lakeview team a few times this season, while Lakeview bested David City who was short a few wrestlers the first weekend of the season. Sutton has some open weights but they’ve worked themselves into the top ten this year for a reason and the Mustangs are a good bet to finish third in the district. They are in a few highly competitive weights so pushing guys through to Omaha will be huge.

Pretty amazing that there are FIVE top ranked wrestlers participating in one district. There is a grand total of 21 ranked wrestlers and two weights have FOUR ranked wrestlers. Expect to see some weight changes in a few areas and recent results from a few wrestlers indicate that some are already testing the waters at other weights.

TEAM RACE UPDATE: Really can’t overstate how fun this team race should be. It will be really important for both David City and Logan View to push as many through as possible. Obviously 126 is one of the key weights of the whole event and that will be important for both teams. After the top three teams it looks like 4-5 teams should be competing for a top-five finish.

106:
Freshman Julio Reyes has only one loss on the season to an out of state wrestler. Ancheta has been in and out of the rankings this season. He’s beaten Dozler and split with Escandon. Dozler has head to head win over Keenan and common opponent over Escandon. Bongers has had a good year as well and could grab a medal.

113:
Mueller has common opponent criteria over Thompson based on his win over Bridgmon who beat Thompson in OT. Seeding may come down to record between Schmitt and Thompson, but either way it seems likely they’ll meet in the semifinals. Schmitt has a head to head win over Underwood.

120:
Hernadnez-Jimenez and Patak haven’t met this year. Hansen started the year at 132 and made it down to 120, but has been up at 126 the last few tournaments. He’d have a great chance to qualify if he gets back to 120. Held has a head to head win over returning qualifier Grape.

UPDATE: Hansen has been competing at 120 recently so he’ll be expected here for the district tournament.

126:
This weight is absolutely bananas with four out of the top six in the state, plus a few other state medal contenders. Only four can make it to Omaha however so expect some high intensity heartbreak round matches. Carlson is undefeated on the season. He has an 8-2 win over Harris. Schram won 1-0 over Harris at High Plains. Harris beat Lokken 8-6 and has common opponent criteria over Valencia. Valencia has common opponent over Escandon. Haddix has a .500 record but has wrestled well against some of the wrestlers in this field. He may be up at 132 where’s been the past few weeks though. Poppe has had a solid freshman season but will need a great district tournament to qualify.

UPDATE: Escandon nearly knocked off D#2 Reimers, losing 4-2 in OT. That is his only loss since 12/29. Schram and Reimers have split this season. What a tough weight!

132:
Originally 132 could have been a pretty good landing spot for some of the 126lb guys who might want to try to qualify up a weight, but with Carlson and now Jones dropping down from 138 in recent weeks, this weight all of sudden becomes one of the best in the district. Carlson beat #4 Valentine 5-2 on Saturday. McNulty has only lost once since the break and beat Jones 3-0 last week. He has beaten Eggleston and Thiesen as well. His win over a surging Scdoris really shows he’s ready to make a state medal run. Jones also has common opponent criteria over Carlson. Eggleston has a head to head win over Thiesen. Wouldn’t be surprised if someone tries their luck going up a weight.

138:
Waddington is the clear favorite and returning qualifier Kaup should slot in at the second seed. Barlean has been out of the lineup for a few weeks here so his status for districts is uncertain. Both Barlean and Gehle have head to head wins over Trautman. Gehle appears to be at 138 to make a run to qualify as he started the year at 132.

UPDATE: Kaup had a great showing at state duals. He beat Jones in OT earlier this year so expect a good semifinal matchup between those two if Jones is at 138.

145:
Again, our top seed seems pretty clear with top ranked Justin White. Dorsey has head to head wins over both Valdivia and Homolka.

UPDATE: Huge change here with Hinrichs making the drop to 145 really changes the landscape at this weight. The 4/5 quarterfinal matchup will be a huge match.

152:
Styskal is red hot coming off an 18-5 win over probable second seed Hinrichs. Hinrichs has two wins over Thompson. Hinrichs has beaten Moldenhauer head to head. Moldenhauer has a common opponent over Miller and has split matches with Rodriguez.

160:
On to our second weight in the district with four ranked wrestlers. Hull and Vodicka haven’t met this season. Hull has wins over both Borgmann and Dozler. Borgmann and Dozler have split matches. Vodicka beat Stone this past weekend. Kunc hasn’t wrestled since the first week of January, but does have a common opponent over Dozler. Hard to believe that one of these guys will not qualify if everyone stays at this weight. Would not be the least bit surprised to see someone go up to 170.

UPDATE: Vodicka does have two common opponents over Hull. Kunc is still out of the lineup for Wilber-Clatonia. Dozler had to injury forfeit out of Boone Central Invite and didn’t compete last weekend so his status is in question. It still seems highly likely that we’ll see someone bump up.

170:
For now, the top three are pretty clear as state medalist Moore has returned to the lineup in recent weeks and notched a head to head win over French. French in turn has a head to head win over returning qualifier Kment. It almost has to be a certainty that someone at 160 moves up to 170. Looking at team lineups the best bets appear to be either Stone or Dozler. Both have the records to get second seeds and possibly make the finals up at 170.

182:
Should be in for a good finals matchup between Allen and Booth. Booth has a head to head win over Pohlman. Who captures the fourth spot at this weight? Drudik is the only other winning record it appears.

UPDATE: Hurley from Wood River was able to secure a winning record as well. Cleveland from Boone Central does have a win over Hurley but he will not be seedable.

195:
Escamilla has pinned Alexander, Conety and Avila. Alexander and Conety both beat Cone on Saturday in close matches. Rother hasn’t had many matches but has a few nice wins that indicate he could be in the mix at this weight also if he competes. Nobody ranked at this weight, but there are plenty of quality wrestlers which should make for an exciting weight.

UPDATE: Conety and Cone have actually split matches this season. Conety beat Rother 8-7 over the weekend.

220:
Merten has sat the top of the weight for most of the season. Bailey has climbed the ranks and a 1 vs 2 matchup looms in the district finals. Looks like three others vying for the final two spots. Moore has common opponent criteria over tough freshman Janssen.

285:
Ohrman leads a solid field at 285. He has beaten Escobar head to head twice this year by fall. Ingwersen has really come on as the season has progressed. He beat Escobar 6-5 on Saturday. Rasmussen has a head to head win over Miller and common opponent over Ingwersen which may give him the seeding edge in what could be a possible semifinal matchup. Rasmussen and Totten each have common opponent criteria over one another so it’s possible based on record and the fact that Totten is a returning qualifier that he could jump all the way to the second seed. Another excellent weight that is going to be highly competitive in the early going. Miller did make weight at 220 so it’s possible he’ll be down a weight.

UPDATE: Wilber-Clatonia continues to use both Escobar and Uden at 285. The seeding at this weight is going to be pretty wild because Rasmussen and Ingwersen have common opponent over Ohrman. Rasmussen’s win over SQ Miller may give him the top seed.