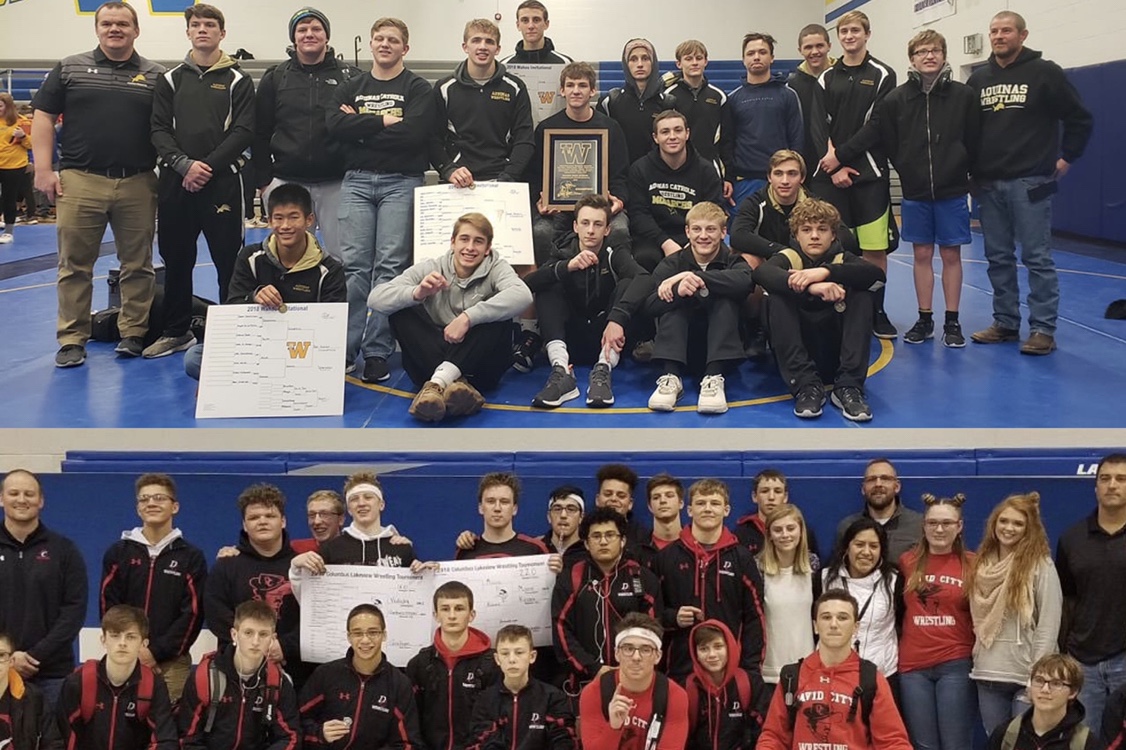 The battle for bragging rights in David City occurs tonight at David City High at the Butler County Tri. Last year the Scouts won 49-26 over Aquinas. This dual is full of swing matches, so bonus points will be key. It also makes the winner hard to predict. On paper, it looks like Aquinas is favored in five matches compared to David City in three matches.

Aquinas has been without Zitek and 113 and the Scouts wrestled at High Plains without their starters at five weights so open spots or injured wrestlers could turn the tide in this dual. Given the close proximity of the teams you’d think that they would have met by this point in the season, but their paths have not crossed so these will be all new matchups for the season.

Prediction (based on previously used lineups and providing everyone is healthy):
#5 Aquinas over #3 David City 33-28

106:
Zach Bongers (DC) vs #6 Hunter Vandenberg (Aq)
Vandenberg has wrestled with the best at his weight in class C. Bongers hasn’t been on the mat since 12/20 but carries a 13-5 record into the dual.

113:
Ethan Underwood (DC) vs #2 Zach Zitek (Aq)
Both wrestlers haven’t competed in the second half of the season. Zitek is undefeated on the season with his closest match being a 6-point win. Underwood has been solid in limited action this season.

120:
Ethan Zegers (DC) vs #6 Noah Scott (Aq)
Scott is coming off a 4th place finish at a loaded weight at his home invite. Zegers is the likely rep for David City.

132:
#4 Jacson Valentine (DC) vs Cameron Schrad (Aq)
Valentine has been out since December. Schrad actually has an OT win over Powers from Broken Bow who beat Valentine by a single point. Expect a close match if these two meet up.

138:
Zach Barlean (DC) vs Creighton Redler (Aq)
Yet another toss-up match. Barlean and Redler are both rankings contenders at 138 lbs.

145:
#1 Justin White (DC) vs Logan Helgoth (Aq)
Top ranked White will be the favorite in a battle with returning state qualifier Helgoth.

152:
#1 Noah Styskal (DC) vs Nolan Eller (Aq)
Styskal will take on Eller from Aquinas who has been having a solid season up to this point. Can he hang with the top wrestler at his weight in Styskal?

160:
#3 Dylan Vodicka (DC) vs Coy Meysenburg/Paul Buresh (Aq)
Vodicka has done nothing but impress all year notching several ranked wins this season. Not sure who Aquinas will bring to the mat as Meysenburg made 160 a few weeks ago but wrestled 170 last week.

170:
Carlos Chavez/Clayton Denker (DC) vs Ben Kment (Aq)
David City has had two reps at this weight this season. Kment from Aquinas has been having a good year so far.

182:
#4 Spencer Allen DC) vs #1 Joseph Reimers (Aq)
The only ranked matchup in the whole dual. Reimers is obviously a heavy favorite, but Allen has really been wrestling well as of late.

220:
Wayne Moore (DC) vs Tad Naiberk (Aq)
Yet ANOTHER swing match. Both wrestlers have had similar results this season and have similar records.

285:
Jake Ingwersen (DC) vs #5 Owen Schramm (Aq)
Ingwersen didn’t compete last weekend, but if he takes the mat should be a tough opponent for fifth ranked Schramm.