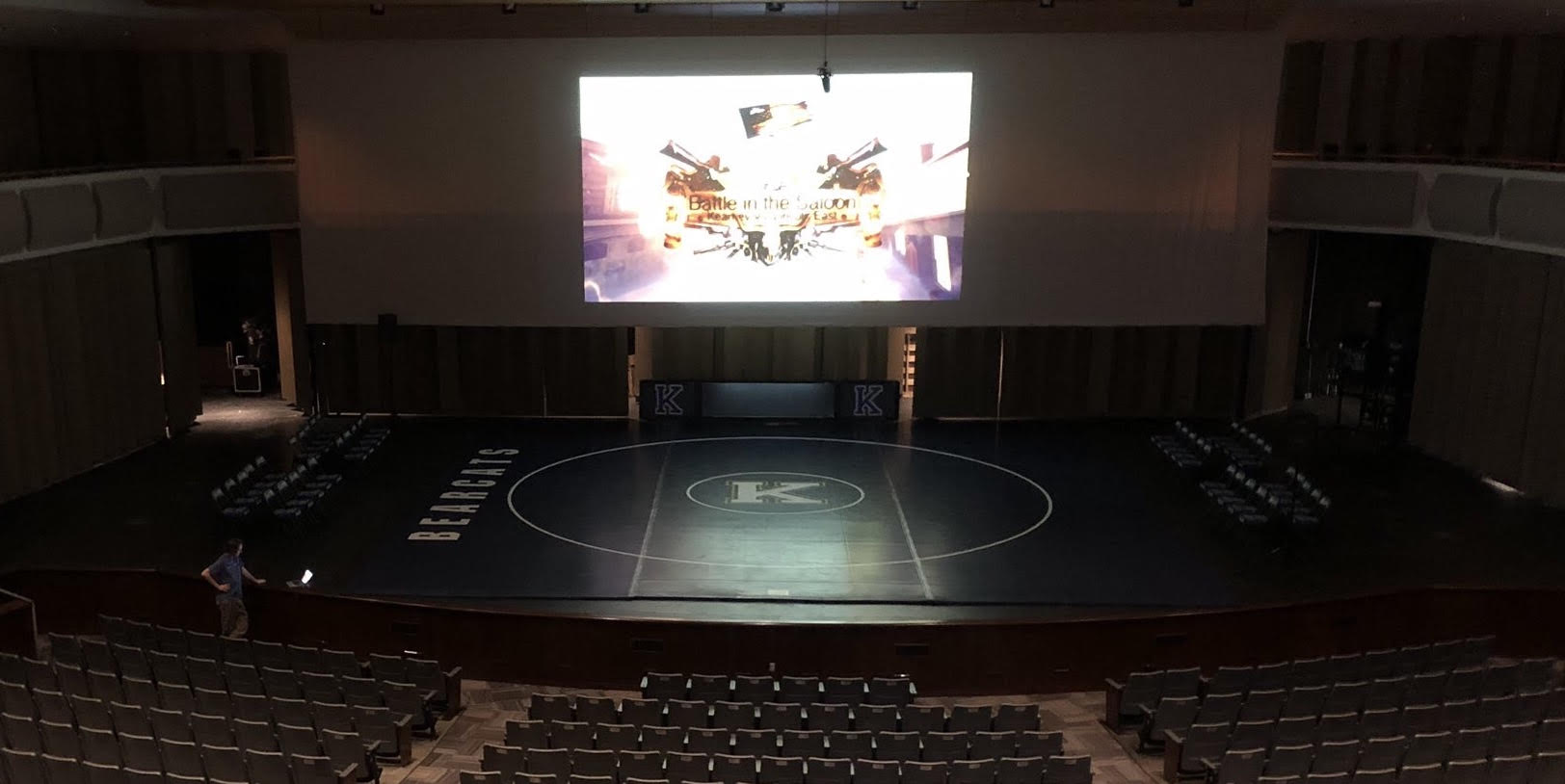 The #3 Spartans will stroll into Kearney and square off against the Bearcats in the “Old West Showdown”. Tonight’s dual will take place in the Kearney Auditorium starting at 126lbs at 7pm. Former 2x HWT State Champion for Kearney Lee Herrington will be on the broadcast through STRIV Sports. Here’s the link to the stream: http://striv.tv/channel/Kearney

Shuffling State Champs:
Each team has 2 returning Class A state champions who are ranked first in their respective weight classes. Moomey of Kearney at 132, Mayfield of East at 138, James of Kearney at 145, and Fry of East at 152. Could we see either or both teams bump up their studs? Moomey and Mayfield have never faced each other before. Mayfield beat James 3-1 at Preseason Nationals back in October. In the 2016-2017 season, James won the first 2 matches against Fry by 4-2 and 5-2 scores, but it was Fry who won the 132A state title with a 10-5 win over James. Could we see returning 113A state champion Brayden Smith could make his season debut for Kearney at 126 or 132? Smith or Ferguson would be favored to win at 126, and either would be in a tough battle against Sperling at 132 should Moomey bump up to 138 to face Mayfield.

Ranked Matchups:
Of the 6 matchups where both wrestlers are ranked in the top 6, East is favored to win 4 of those matches.

Home-mat Advantage:
Last year, the Spartans held off the Bearcats in the Lincoln East Auditorium in a close battle thanks to their student cheering section, whose heads were at mat level. The Kearney Rowdies student section will be up in the rafters, and will make sure that the Spartans wrestlers feel the heat pouring down upon them throughout the entire dual.

Previous Meetings:
Kearney beat East in the quarterfinals at the Flatwater Fracas 40-33 on December 15 and outscored them 145-121 at their home invite on December 21.

106
#4 Archer Heelan (Kearney) vs #5 Brandon Baustert (Lincoln East)
Heelan has won both matches over Baustert this season by 6-2 and 5-1 scores. Both freshmen are gamers and put points on the board. This will be the most hotly contested match of the night.

113
#5 Hunter Nagatani (Kearney) vs Nic Swift (Lincoln East)
Nagatani beat Swift 10-6 at the Fracas, but did not face Swift at the Kearney invite. Swift is always a tough out, so this should be a battle.

120
#3 Rylie Steele (Kearney) vs #2 Nathan Rizek (Lincoln East)
Rizek has pinned Steele in 1:11 at 2:36 this season. This will be the last match of the dual, so we could see Steele need to steel a win, or just avoid bonus points.

126
#6 Gage Ferguson (Kearney) vs Shaemon Erb (Lincoln East)
Ferguson is the favorite here as he pinned Erb at the Fracas, but Erb has a mean streak and could be East’s hero should he pull the upset. This is the first match of the dual, so a pin from Ferguson would really get the Kearney Rowdies fired up.

132
#1 Phillip Moomey (Kearney) vs #6 Breckin Sperling (Lincoln East)
Moomey has pinned Sperling in 0:46 in 1:21 this season, so it’s safe to assume Moomey will earn bonus points in this match. If Sperling can keep it to a major decision, that would be a huge benefit to East.

138
#3 Gauge McBride (Kearney) vs #1 Maxx Mayfield (Lincoln East)
Mayfield pinned McBride in 3:00 at the Kearney Invite, and Mayfield will be trying to duplicate that result tonight.

145
#1 Nick James (Kearney) vs Caidell Davis (Lincoln East)
James won by 18-3 tech fall over Davis at the Kearney Invite, and should likely repeat that performance while trying to sniff out the pin for the extra bonus points.

152
#6 Colton Kowalek (Kearney) vs #1 Chance Fry (Lincoln East)
These two have not met this season, but Fry has pinned every opponent he has faced. Fry is as adept at scoring bonus points as the three state champs in action before him, and he knows his team needs bonus points in this dual.

160
Carter Abels (Kearney) vs Edward Lankas (Lincoln East)
Abels owns 11-0 and 7-2 wins over Lankas this season. Getting a bonus point win at home would be huge for the sophomore.

170
#4 Gus Franzen (Kearney) vs #3 Grant Lyman (Lincoln East)
These two have not faced each other this year, and are both solid wrestlers. Lyman is the higher ranked wrestler and owns a state medal, but don’t count out Franzen.

182
Bronson Amend (Kearney) vs Chris Karmazin (Lincoln East)
Karmazin won by fall in 2:34 at the Fracas, and a 4-2 sudden victory win at the Kearney Invite. Amend can be a hero if their third meeting becomes a charm in Kearney’s favor.

195
Josh Pierson (Kearney) vs #6 Noah Sprieck (Lincoln East)
Sprieck owns a 4-0 and a fall in 5:40 over Pierson this season with the fall coming most recently at the Kearney Invite. The East coaches are definitely hoping for bonus points in this match.

220
Dario Rodriguez (Kearney) vs Blake Pieper (Lincoln East)
Pieper has pinned Rodriguez in 4:21 and 5:08 this season. If Rodriguez can avoid the pin, it will go a long way in helping the Bearcats.

285
Peter Kreutzer (Kearney) vs Gege Crayton (Lincoln East)
Crayton won 8-1 over Kreutzer at the Kearney Invite. Crayton is a freshman and Kreuter is a sophomore, so both underclassmen have opportunities to compete like veterans and come up big.