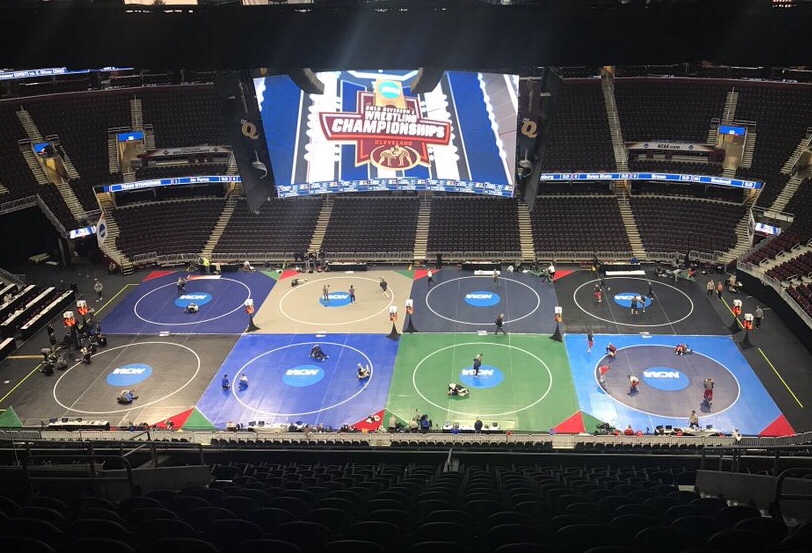 The NCAA Division I Wrestling Championships kick off tomorrow morning at the Quicken Loans Arena in Cleveland, Ohio. With only two returning qualifiers from last year’s ninth place team in the lineup, the Huskers qualified an impressive seven wrestlers to the NCAA tournament this year. The young Nebraska team has four wrestlers seeded in the top 11.

Blair High School graduate Will Schany, competing for the University of Virginia, is making his first championship appearance by way of an at large bid at 174 lbs.

Here’s what to expect in the early rounds.

True freshman Renteria has only twelve matches on the season after coming out of redshirt in January. He has notched some impressive wins in that short time. His first-round match is against the 13th seed Bryan Lantry of Buffalo. Although Renteria is unseeded he should have a solid chance to win this first round matchup. Lantry owns a 1-point win over Delvecchio from Rutgers who Renteria has beaten three times. If he wins his first match he will have the winner of 4th seed Brock from Oklahoma State or Duncan from Illinois. Duncan won 9-8 over Renteria at the Big Ten Tournament.

Red has been ranked in the top ten for part of the season but is unseeded at the NCAA Tournament. He will have a huge test out of the gate against the 7-seed Zacherl from Clarion, who suffered his first loss of the season two weeks ago. Win or lose Red will see either unseeded returning All-American Thorn from Minnesota or the 10th seed Smith from Central Michigan. Red owns an OT win over Thorn this season.

McCrystal came up one match short of All-American status last season. He’ll look to finish his career on the podium. He is the 13th seed and will be favored in his first-round matchup against Degen from Iowa State. In the second round he’ll have a tough test again Heilmann from North Carolina. Heilmann beat McCrystal by major decision when the Huskers dualed the Tarheels.

Berger is Nebraska’s only returning All-American this year after a 5th place finish at least year’s NCAA Championships. He enters this year as the 8th seed. He’ll be favored in round 1 against Penn’s Velliquette. Berger has two close wins over possible second-round opponent Colgan from Wyoming. If he wins those two he’ll square off against top seeded Hidlay from NC State. Hidlay won 6-3 when the two teams met up earlier this year, so Berger will hopefully flip the script in that match to make his second consecutive trip to the national semifinals.

White won a DII title last year for Notre Dame College and is making his first trip to the NCAA DI Championships. White was given the 11th seed, but he should feel confident about his chances to All-American. He was tied with top ranked Isaiah Martinez in the 3rd period at the Big Ten Tournament. If he wins in the first round over Romero from Utah Valley he’ll likely see Rutgers’ Jr World Champ and 6th seed Richie Lewis. White and Lewis met earlier this year with Lewis winning a 2-1 tiebreaker match. If he can get past Lewis, then he could see returning National Champ Vincenzo Joseph in the quarterfinals.

The former Blair 4-time state champion will square off against the 7th seeded Lujan from Northern Iowa in the first round. His second match will be against a familiar foe from the ACC conference in 10th seed and former All-American Ethan Ramos from North Carolina or Hunter Bolen form Virginia. Both wrestlers have wins over Schany this year. The match with Bolen was a 5-4 battle. Bolen and Ramos have split this year.

Taylor Venz is the highest seeded Husker in the field this year, earning the 7th seed. He owns a win by technical fall over his first-round opponent, Polson from Wyoming. His second-round match will be either against 10th seed Emory Parker from Illinois, who he’s split matches with this year, or Chip Ness from North Carolina who he beat 13-11 in sudden victory OT in their dual meeting. If he wins the first two his likely quarterfinal opponent would be former national champion and 2nd seed Myles Martin from Ohio State, who has a convincing win over Venz early in the season.

Schultz will face Iowa’s Wilcke in the first round. Wilcke and Schultz didn’t meet at the Big Ten Tournament. The 14th seeded Wilcke finished 6th and Schultz was 7th. Schultz does own a win over Michigan’s Beazley who beat Wilcke twice during the year so expect a competitive match in round one. Schultz will face Haught of Virginia Tech or Seely from North Colorado in his second match. The 3rd seeded Haught hasn’t lost since the beginning of December.