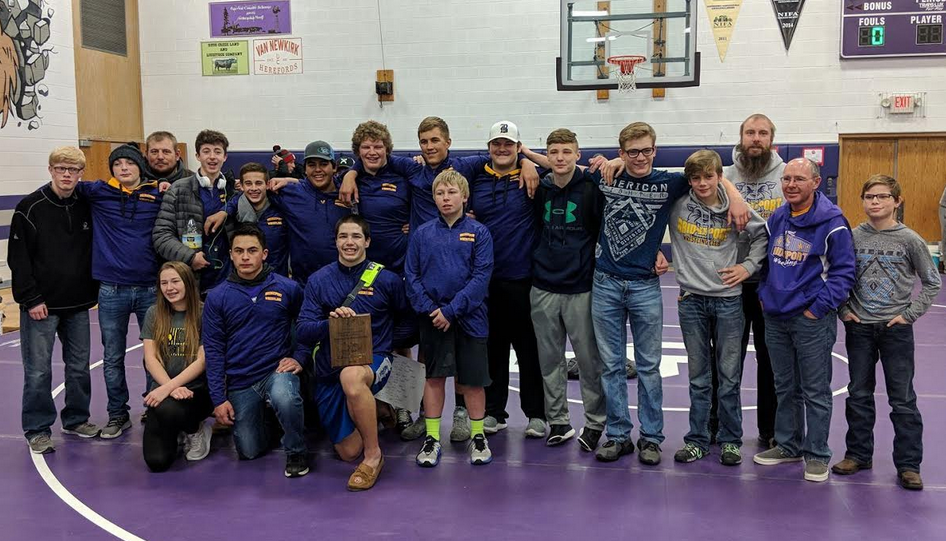 The top two teams in the state are set to collide in the C4 district. They’ve met twice this year, at Valentine’s home invite and in a dual with the two teams finishing 1st and 2nd at the Valentine Invite and the dual coming down to the last match. Although Broken Bow has an additional projected qualifier, Valentine will be favored to capture the district title on the strength of seven projected champions and likely top seeds. Ord and Bridgeport should be in a battle for the third spot. If #1 Gabriel and #2 Vasquez wasn’t a big enough potential matchup the way it is, imagine that match having team implications. There are several weights where there are six to eight wrestlers that have a good shot at qualifying, so something will have to give at a few of those. Also expect for a few names that aren’t listed below to make the trip to Omaha. The teams in this district have varying degrees of schedule difficulty, so a .500 wrestler for a team with a tough schedule may make a splash and knock off someone early on with fewer losses. This is always one of the toughest districts to find common opponent matchups due to the sheer distance between some of these schools and a few of the weights are jumbled up a bit due to upsets that will likely impact the seeding.

Williams has a major decision win over Benavides and has claimed the top ranking in class C. Heath has common opponent over both Hilliard and Garey. Garey has common opponent over Hilliard. The seeds seem to be pretty well set at this point and the 4/5 quarterfinal should be a great match. Garey has head to head over Hilmer. Going to be a few solid wrestlers that won’t make it out of this weight.

New #1 Faulkenberry has bested Rowse convincingly four times this season. Rowse’s only other losses are to B#3 Quandt by narrow margins so he can expect a fifth match with Faulkenberry in the district finals. Cluff is a good bet to capture the third seed based on record. Ackley appears to be the only other winning record at this weight. He has a one-point win over Battershaw earlier this year.

Krolikowski and Gaffney became familiar with each other last season after wrestling several times. Gaffney actually came the closest to knocking off Krolikowski in his undefeated freshman season. Look for those two to meet in the finals. After the top two things get a bit complicated. Petska from Ord may not be back this season, so returning qualifier Boyce dropped down to 120 and knocked off Treffer from Ravenna 8-3. Boyce also has beaten Feldner head to head. Treffer has a head to head win over Feldner and common opponent over Fleecs. Pederson has beaten Fleecs head to head and based on record looks like the third seed going into the tournament. There’s a ton of wrestlers vying for a few spots as it looks like the top two are solid at this weight.

Powers will be a heavy favorite to win the district. Child from Gordon-Rushville seems to always save his best stuff for the end of the year and recently knocked off #4 Brandenburg by fall. Powers pinned Child earlier this season. Child has a head to head win over contender Chasek. Shiers has common opponent over Bruns and is a returning state qualifier. Ryschon has a common opponent over Child, but he hasn’t wrestled in a month. Pederson wrestled 126 for Kimball last weekend so it’s possible he may be at 126 for districts.

Kelber should cruise to a district title. Alvarado from Ord has been wrestling well lately and has beaten both Chasek and Cole head to head. Chasek and Widener have met four times this season and are 2-2 against each other. Cole should have a good shot to qualify as well but doesn’t appear to have common opponents with Widener or Chasek.

Ramon should enter as the top seed. He has head to head wins over Pozehl and returning qualifier Henry. Henry has beaten Warren head to head. Another complicated weight to predict because there aren’t many common opponents between the central and western wrestlers. Rogers is also a returning SQ but was pinned by Brass earlier in the year. Brass and Kluthe have split matches this season. Holsten has a head to head win over Pozehl. Kluthe has common opponent over Pozehl and Rogers. Some tough wrestlers will not make it out of this weight. Will be a tough one to seed as well, but we’ll definitely be seeing some competitive matches in the early going.

Very tough weight with three ranked wrestlers. Mackley has also been in the rankings. Olson beat Ulmer in OT in a dual meeting earlier this year. Ulmer has two head to head wins over Mackley and a win over Weiss. Weiss beat Mackley in OT and has two wins over Hoos. Hoos has been out with injury, but has common opponent over Mackley in what will be a huge 4/5 quarterfinal matchup. Mackley has common opponent over Anderson who will be a threat to medal here as well.

Myers has head to head wins over Benson, Halverson and Shoemaker and is the clear-cut top seed. Benson has a one-point win over Richardson and has beaten Halverson by fall. Richardson has a one-point win over Halverson. Shoemaker has a common opponent over both Benson and Richardson. Halverson has common opponent over Shoemaker. Peterson from Chase County is apparently injured and will be unable to compete. After Myers it looks like four evenly matched wrestlers jostling for three spots.

Returning state champion Long beat Becker 5-3 the first week of the season. Becker hasn’t had a loss since that first weekend and is the favorite to make the finals on the bottom part of the bracket. Duda didn’t meet up with Long in teams’ dual earlier this year, but has a great track record this season. Cooper from Bridgeport is 2-1 against Denton in their three meetings this season.

Behind Stephen this weight appears to have several others capable of qualifying. Hamilton-Harris looks like a good bet to be the 2nd seed. He’s beaten Fisher, Lange and Gilliland all by decision. Gilliland has a head to head win over Lange in one of his seven total matches this season. Fisher has common opponent over Lange as well. Ulrich and Chapa have split matches. Smith has a common opponent over Ulrich. Another weight with a ton of depth and lots of good quarterfinal matches.

Four possible state medalists in the field at this weight. Lech and Feldner have split matches this season. Coalson has only three losses on the year, two to D#1 Wood. Lech lost to Wood 4-3. The seeding here will be interesting because McGinley has a common opponent over Lech and Coalson has a head to head win over McGinley. That should mean that Lech and Feldner will be the 3rd and 4th seeds and on opposite sides of the bracket. Not much separates these wrestlers so expect some great semifinal matches. Both McGinley and Coalson have wins by fall over returning qualifier Haarberg. A few other wrestlers at this weight that have upset potential which could make the early rounds exciting.

Probably the marquee weight of the tournament with the top three in the state and medal contender Gappa in the field as well. Gabriel beat Vasquez last year in the district tournament and has common opponent over him this year. Vasquez beat McGahan head to head 7-3 after getting out to a 5-0 lead in the first. Gappa qualified two years ago and has been very solid this season. Gabriel has common opponent over Gappa who has split with Kee of Gibbon.

Returning finalist Hinojosa hasn’t met up with Brooks this year since he was at 285 to start the season. They met three times last season with Hinojosa winning them all by fall. Brooks is very dangerous and is never truly out of a match. Franklin from Bridgeport looks like the third seed as he’s beaten Coley and Nicholson head to head. Flessner has a head to head win over Coley as well. Will probably come down to Nicholson, Flessner and Coley for the last spot unless someone bumps up from 195.