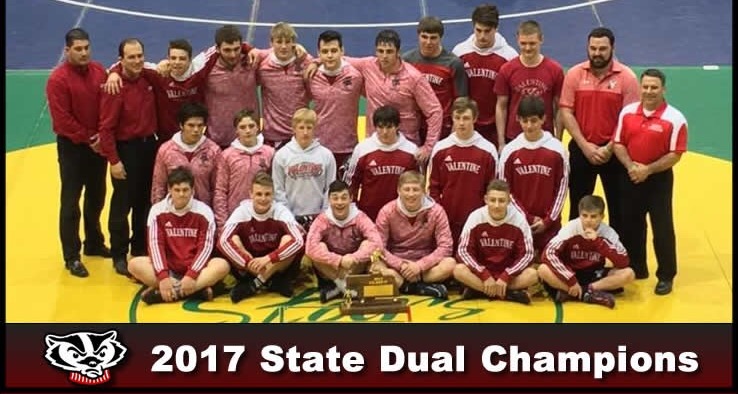 #1 Valentine over #8 Ord 54-15
Valentine wrestled a very solid dual against Ord and won four out of the five bouts that were within five points. Every weight except for 182 had at least one state qualifier competing in this dual.

#5 Broken Bow over #4 David City 34-32
A very evenly matched first dual was officially decided with one match to go. These two teams had several hard fought matches, with seven matches going the distance. One of the key bouts at this weight was at 132 where Ulmer from Broken Bow edged out SQ Betzen from David City 11-8. Broken Bow was also aided in the return of Caleb Smith at 106 who did not wrestle at districts, but would have been in contention for a state qualifying spot if he had.

#3 Syracuse over #6 Aquinas 39-34
Syracuse was able to avenge a 1-point dual loss earlier in the season with a win in the first round over Aquinas. A fall at 182 locked the dual up with one match to go for Syracuse as the 182lb state champ from Aquinas, Joseph Reimers, was wrestling up at 220 in a spot that was previously occupied by state qualifier Jackson Witter.

Semifinals
#1 Valentine over #5 Broken Bow 37-36
Seven of Valentine’s starters either shifted weights or didn’t wrestle in this dual, as they managed to get away with a 1-point win over Broken Bow in a final score that was drastically different than their first meeting won by Valentine, 57-9.

#2 Battle Creek over #3 Syracuse 41-30
Down one with two matches to go, Battle Creek won the last two matches by fall to win the dual and advance to the finals. Each time had two wins by decision. Battle Creek took advantage of two open weights in the Rockets’ lineup as well.

3rd place dual
#5 Broken Bow over #3 Syracuse 50-28
Broken Bow wrestled an excellent dual in which they took advantage of their depth at several weights and moved their lineup around in some spots en route to a convincing win. Only 1 match went the distance in this dual.

1st place dual
#1 Valentine over #2 Battle Creek 37-30
The Badgers pulled through in a dual that came down to the last match at 285 which saw Fulton from Valentine get a last second takedown to win the match 2-0. Six matches went the distance at this weight and Valentine was able to win four of those. A huge swing match a 120 went in Valentine’s favor where the two wrestlers had split matches during the season and Benson from Valentine was able to secure the fall in the rubber match.