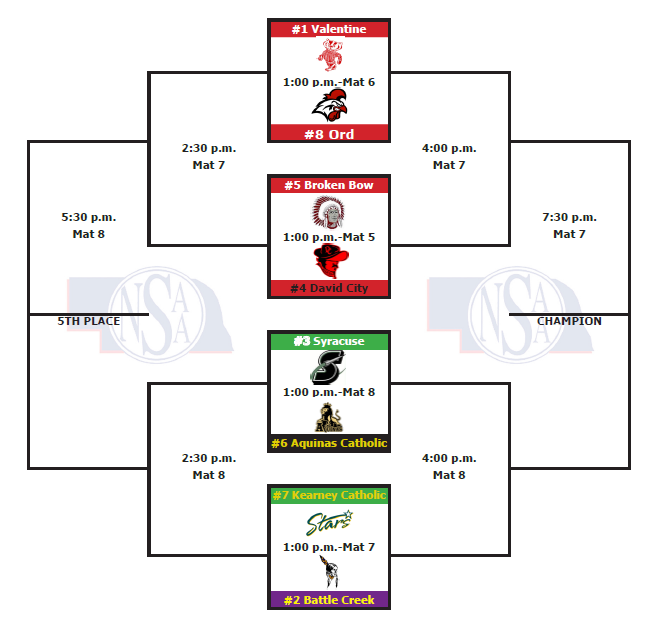 Valentine comes into the state duals as the heavy favorite, just as they were in Omaha. They boast four state champions and nine total state medalists from the state tournament as they broke the Class C total team points record with 195 points as well as the most pins recorded at the state tournament with 17. Assuming everyone who competed at districts is still in the lineup, Valentine will be very difficult to knock off.

In addition to Valentine the C4 district is also being represented by Broken Bow, Kearney Catholic and Ord. C1 is bringing Battle Creek and Aquinas. C2 is represented by state runner up David City and C3 by Syracuse. All eight teams have six or more state qualifiers and a minimum of two state medalists.

In past years there are typically top wrestlers from various teams without their normal starters in the lineup for state duals. There are a number of reasons for that, but those teams missing wrestlers can drastically impact the results of the dual matches. To keep things consistent teams’ district lineups and any prior matches between them will be used to determine a projected winner for the first round duals. Keep in mind that lineup shifts may occur to strengthen lineups and add points that could shift the dual in another team’s favor, but that is not accounted for unless mentioned.

Valentine and Ord didn’t square off at the Valentine Invite in December because weather cancelled the tournament. They first saw each other at the C4 district tournament, but only had two matches between each other. Strictly looking at district places Ord finished ahead of Valentine at 160, 182 and 195, so Valentine will be heavily favored in this dual. Every weight will have a state qualifier competing, Valentine has 12 state qualifiers and 9 state medalists (4 champs), while Ord has 7 state qualifiers and 2 state medalists. State qualifiers/medalists from each team will square off at 106, 120, 152, 160 and 170. The potential highlight match of this dual is between Valentine’s 170 lb state champion Donald Stephen and 4th place Gavin Trompke. They wrestled at districts in a match won by Stephen, 6-2. A few other marquee matches at this weight include a battle between qualifiers at 160, Kaden Dawe and Kieron Wenig as well as the 106 lb bout between 3rd place Chase Olson squaring off against Colton Rowse, who was one match away from placing in Omaha.

Battle Creek and Kearney Catholic were both at the High Plains Invite at the beginning of January so there is some familiarity between these two teams. Battle Creek is an extremely deep team as evidenced by their ten state qualifiers and six state medalists (1 champ). Kearney Catholic is only open at 195, but will have to keep pace in the lighter weights as they have six qualifiers and three medalists all at 152 or lighter. Matchups between qualifiers/medalists from both teams will occur at 106, 126, 132, 138 and 145. There are two marquee matches in this dual. The first occurring at 132 between state 4th place Ty Heimes and 5th place Carter Fleshman. They did not meet at the state tournament, but Fleshman won a close 4-2 match at High Plains. The second highlight match at 145 will occur between Blake Heller and Ty Connely. Heller won a 6-4 overtime match in the heartbreak round at the state tournament. Expect a close dual through the lighter weights, but Battle Creek appears to have too much depth across the board and should win this dual based on the strength of their upper weights.

These two teams have actually wrestled each other at the Wood River duals at the end of December. Aquinas was the victor in a 1-point dual, 37-36. Neither team was completely at full strength, with Syracuse missing state qualifier Austin Jensen at 195 and Aquinas being without their district entries at 120 and 195. There were some results of note in the first dual. Syracuse state qualifier Mitch McWilliams defeated eventual state champion Kyle Petree 11-7. They will hope for a similar result in Kearney in order to win this one. Another match of note was Syracuse state qualifier Jeff Burr losing by major decision to Joe Kindler from Aquinas. Both teams are open at 113 so there may be some weight shifting one of the 106 lb wrestlers here to take a forfeit as there was in the first dual. Syracuse has 8 state qualifiers and 3 medalists (2 champs) while Aquinas has 7 state qualifiers and 3 medalists (2 champs). State qualifiers/medalists will square off at 126, 160 and 285. The marquee match of the dual is certainly the previously mentioned Petree vs McWilliams bout at 160 lbs. This one may come down to bonus points.
#4 David City vs #5 Broken Bow

Another dual between two teams who would have seen each other at the Valentine Invite had it not been cancelled. They did not compete in any of the same tournaments in the regular season, but did meet at three weights during the state meet. David City won two of those matches at 220 and 126, while Broken Bow won the head to head battle at 120. Broken Bow each have eight state qualifiers. David City brought home five state medals, while Broken Bow brought home two. Broken Bow will have to rely on their depth to stay close in this dual. On paper it looks to be a very close dual with several ‘toss-up’ matches. Matches featuring state qualifiers/medalists from this year occur at 113, 120, 126, 138, 195 and 220. The matches that decide this dual may occur at 106, where Broken Bow competed at districts without their starter for the season and 132. The 132 lb match features state qualifier Betzen against Broken Bow’s Cole Ulmer. Ulmer qualified for state in 2016 and had multiple wins over state qualifiers and medalists throughout the season this year, but didn’t qualify at a very tough district weight. This is another dual that is expected to be extremely close and may come down to bonus points.

Assuming Valentine gets by Ord in the first dual, they will square off against the winner of David City and Broken Bow in the semifinal dual. Valentine and Broken Bow dualed earlier in the year and won 57-9. Valentine may have a few injured wrestlers which could bring the dual to a closer score if they were to meet up in the semis. One key matchup between Valentine and Broken Bow would be at 113 where Gage Krolikowski has won twice over Spencer Gaffney, but it was a 2-point match last time they faced off. 120 would be the other weight between two state medalists with Clayton Glendy and Brody Benson. Glendy won their two prior meetings, once my decision and once by fall.

If Valentine meets David City in the semis, then the top two teams from the state tournament will be meeting up in the semifinals. The lightweight bouts in this dual would be great as they both have medalists at 113, 120, 126 and 138. 120 would be the highlight match there as Benson was 4th and Styskal 5th in Omaha, but they didn’t meet up in the process. Valentine figures to distance themselves in this dual from 145-170 where they have two state champs, a medalist and a qualifier whereas David City doesn’t have any state qualifiers in those weights. Look for Valentine to power through to the finals regardless of their semifinal opponent.

Assuming Battle Creek is able to get past Kearney Catholic in the first round, they will meet up with either Aquinas or Syracuse in the semifinals. Battle Creek is familiar with Aquinas as they were the top two teams in the C1 district. At the district tournament, Battle Creek won matches at 120, 126, 132, 152 and 195. Aquinas won matches at 138, 170 and 182. At 285 they split matches at the district tournament. Battle Creek will look to get 6 points at 106 and 113 with their state champion McCracken at 106 and Aquinas has been open at 113. Aquinas will look for 6 at 160 with their state champion Petree and continue their success through the upper weights. A marquee matchup at this weight if the dual happens is at 220 where 5th place medalist de Jager and state qualifier Witter may square off. Witter is a tough opponent and his two losses in Omaha were to state medalists, one being in OT the eventual 6th place finisher.

If Battle Creek wrestles Syracuse it will be the first time they’ve seen each other throughout the season besides the state tournament. Battle Creek won their two head to head matchups in Omaha at 120 and 195. Once again Battle Creek should be favored in the lower weights here with the exception of 132 where Syracuse has state champ Max Hughes ready to square off against Ty Heimes who finished 4th respectively. 170 could be a good matchup between Johnson from Battle Creek and Snyder from Syracuse. Austin Marx at 195 got the better of Syracuse’s Austin Jensen at the state tournament. Syracuse would like a different result there in order to hang close to the finish of the dual. It appears that if Battle Creek is healthy they should be able to punch their ticket to the finals regardless of their opponent.