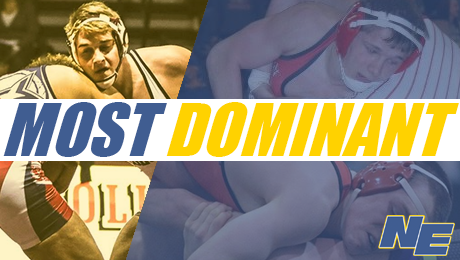 Derek Robb owns a spotless 52-0 record and has earned bonus points in all but one match, which was an 8-3 win over a state finalist from Wyoming while wrestling up at 160. Along with 42 pins, he has 2 technical falls and 3 major decisions. He’s the favorite to win the class B state title at 152.

Palmer is ranked 9th in the class D standings, and has 3 wrestlers on this pins list. The Tiger Trio is murderer’s row with Spencer Wichmann at 145, along with brothers Connor Donscheski at 152 and Chandler Donscheski at 160.

Class A and class B are most represented on this list, both having with 5 wrestlers. Class C has 3 wrestlers and class D has none.

Along with his 17 technical falls, Riley Berg has earned 17 falls and 3 major decisions to give him a 46-0 record. He’s a three-time state placer and two-time state finalist, and is a top contender to bring home the class B state title at 138.

Millard South and Wood River each have two wrestlers on the list who are striving for their first state titles.
Sophomores
106A Blake Jackson (MS)
120C Evan Waddington (WR)

Class A schools occupy 9 of the 21 on the list with class B holding 7 spots. Class C and D each have two on the list.

Kylan Byars is currently ranked #4 at 152 in class A. He has amassed a 32-11 record this season and a finished last season with a 37-9 record and was a state qualifier.

Fairbury has two wrestlers (Patrick Ondrak and Damian Green) on the list with 8 major decisions.