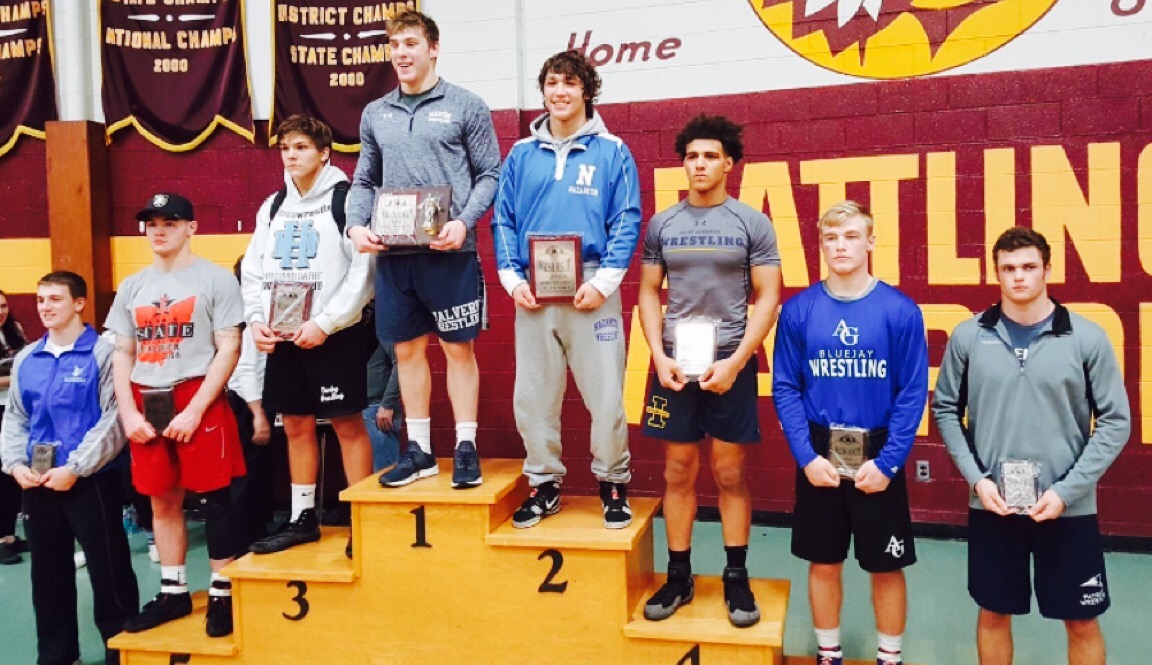 Two-time state champion Trevor Nichelson won 4 matches and finished 6th at 182 at the Walsh Ironman in Ohio this past weekend. He began the tournament as the 5th seed and advanced to the quarterfinals with a first period fall and 8-4 decision. After losing in the quarterfinals, he rebounded with two falls to advance to the consolation semifinals. He lost 6-3 to an opponent from Ohio, then lost 4-1 to the same opponent he wrestled in the quarterfinals. Nichelson wrestled from whistle to whistle throughout the entire tournament and it showed with bruises and cuts on his face on Saturday night.

Nichelson earned All-American status in the 85kg Greco division of the 2015 UWW Cadet Nationals, and has come very close to earning All-American status in Fargo and Folkstyle Nationals the last two years. “A difference between this tournament and the others I have been close to placing at, is the amount of consistent training I have put in before this tournament. Another difference, was my mindset was to try to win this tournament and knowing that I could beat anyone compared to the other tournaments that I was just trying to medal at,” said Nichelson as he analyzed his preparation.

His steady improvement throughout his career has been apparent. “I owe all the times I have improved to finding ways to make myself uncomfortable. Whether it has been going to camps or offseason tournaments, just exposing myself to as much wrestling and investing as much time as I can into the sport has led to my improvement,” explained Nichelson.

Seeded 21st at 120, Devon’Tae Gutierrez won his first match by fall in 3:52, but lost his 2nd match to the eventual 4th place finisher from Illinois. Gutierrez’s tournament ended when he lost his next match in consolation by fall to an Ohio opponent.

In 2013, JaVaughn Perkins of Omaha North won 2 matches by fall and one match by a 2-1 decision to advance to the semfinals at 182. He lost 9-2 to the eventual runner-up from Ohio, but won his next consolation semifinal match by fall in 56 seconds over a two-time Oklahoma state champion. Perkins lost a razor thin 1-0 match to finish 4th.

Also advancing to the semifinals in 2013, was Colton Adams of Scottsbluff. He used a fall in 3:02, a medical forfeit, and a 4-2 decision to reach the semifinals at 138, but lost 6-2 to the eventual runner-up from Pennsylvania. He beat an Illinois standout 3-2 in the consolation semifinals before losing 4-3 to an opponent from California.

Doyle Trout competed at the Walsh Ironman three times in his high school career. As a sophomore at 106, he went 3-2 and was two wins away from placing in the top 8. In 2013, he went 1-2 at 120. In 2014, Trout entered the tournament as the #4 seed and used two falls and an overtime win to advance to the semifinals. He lost to the eventual champion from Pennsylvania, but bounced back to win 8-0 in the consolation semifinals. Trout’s tournament ended with a 5-0 loss to an opponent from Texas.