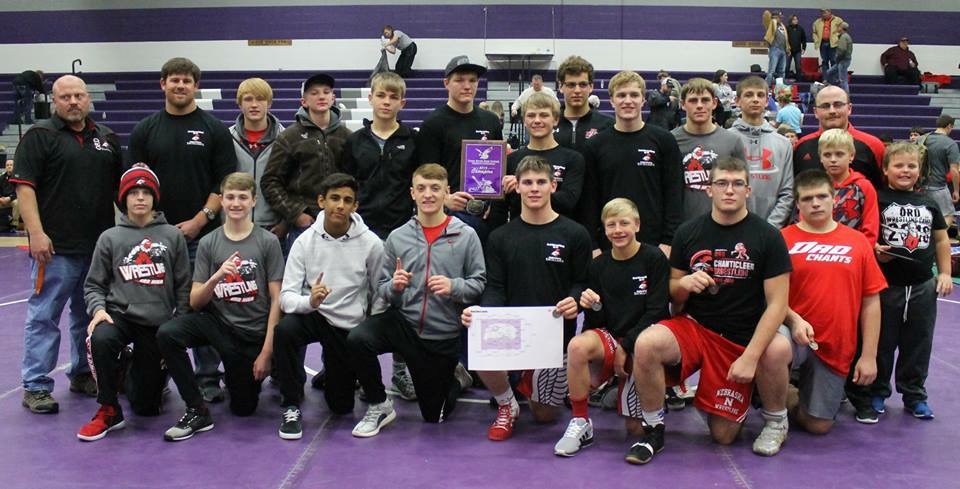 106 – Layne Shiers from Kearney Catholic is down from 113 and defeated freshman Rowse of Ord in the finals 11-7.

132 – In a battle between the 5th and 6th ranked wrestlers Kearney Catholic’s Carter Fleshman emerged victorious over Chace Bond from Wood River.

152 – #1 Marc Zeckser dominated the field at 152 which had several state qualifiers. He defeated #4 at 160 Jacob Tracy from Gibbon by fall in the finals.

160 – #2 ranked Kyle Petree was nearly upset by Ord’s Kaden Dawe in the semifinals but managed a 6-5 decision. In the finals Petree squared off against #6 at 170 Stephen Duffy and won by fall.

Saturday’s main Class C tournament was the Stanton Invite. In an exciting team race, Battle Creek won by 5.5 points over David City with Class D Plainview only 2 points away from the runner up trophy.

106/113 – A potential #1 vs #2 match between Battle Creek’s Caden McCracken and David City’s Seth Styskal didn’t materialize as Styskal was up at 113 after competing at 106 last week. Both cruised to victories.

152 – Ryan Haskell from Madison emerged victorious in the finals over Heller from Battle Creek. Heller pulled off the upset of #6 ranked Dillon Hupp from Norfolk Catholic in the semifinals.

Top ranked Valentine appeared to be closer to full strength at the Gordon Rushville Invite. Even without #2 at 145 Hudson Pearman and #2 at 195 Dean Haase, they had 8 team champions and ran away with the team title. #2 ranked 113 Gage Krowlikowski of Valentine finished 1st with wins over #3 in D Araujo of Bayard and #4 in C Quin Child of Gordon – Rushville wrestling at 120.

At the Nebraska Duals, O’Neill’s Caden Moore notched a major decision over B #2 ranked Layton Mullinix from Columbus Scotus en route to going undefeated over the two-day dual tournament. Teammate #1 ranked Jason Hahlbeck also went unscathed pinning everyone he faced. Expect Caden Moore to stay at 145 and teammate Bailey Thompson to remain at 195 for the remainder of the season.

#1 Clayton Glendy suffered his first defeat of the season to Ryan Johnson from Norton, KS

#4 ranked Alex Dubas was upset by Christian Lovan from Fillmore Central at the Osceola Invite.

In a Thursday dual between Battle Creek and O’Neill, #1 ranked Jason Hahlbeck defeated #6 at 195 de Jager.