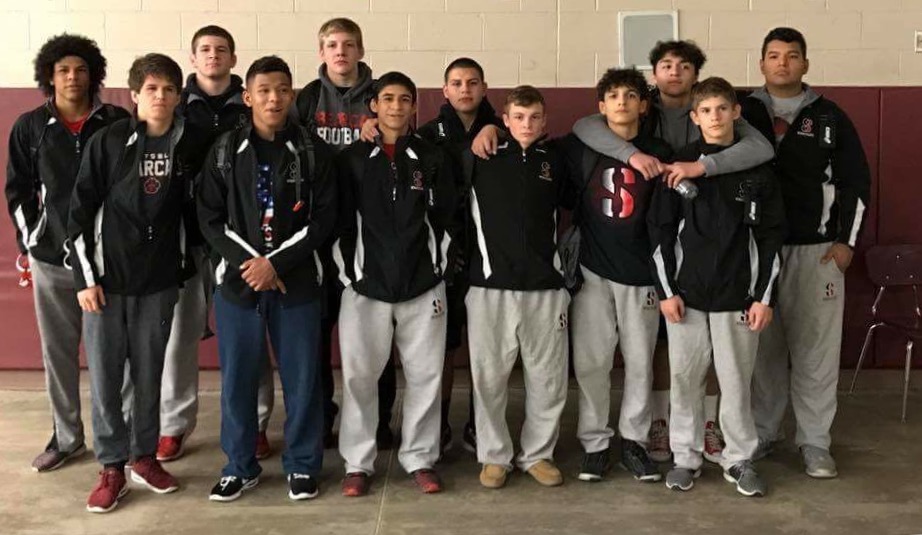 Scottsbluff won the Wizard duals in Colorado for the first time in a long time. Although they aren’t typically considered a strong dual team, they had the depth to back up their firepower and won all 5 duals. They beat #4 (in Colorado) Windsor in the finals 35-29, even though trackwrestling.com had the score in favor of Windsor. Scottsbluff also beat 5A Colorado state runner-ups Poudre by a score of 39-30. Mario Ybarra at 132, Ben Rodriguez at 145, Sabastian Harsh at 160, Salem Harsh at 182 and Genaro Gurrola at 285 all had 5-0 records on the day to lead the Bearcats.

Gretna won the Dan Hill (Harlan, IA) Invitational with 260 points to 2nd place Logan-Magnolia’s 218 points. The Dragons had 5 champions including Van Schmidt at 113, Tyler Cunningham at 126, Lance Jarrett at 160, and Grant Bruner at 195. Runner-ups were Trevor Fauver at 120, Tristan Towey at 138, and Pat Arnold at 285. Placing third in their weight classes were Cole Huss at 145, Cody Everhart at 152, Kobe Everson at 170, and Connor Fee at 220. Trevor Nichelson of Ashland-Greenwood won the 182 bracket with a 14-12 finals win over Anthony Sherry of Glenwood. Nichelson was behind 12-9 with time running out, but summoned his Greco powers to launch Sherry to his back. It was a high-flying match as both wrestlers were thrown to their back multiple times.

Skutt Catholic finished 4th at the Gardner Edgerton Invitational in Kansas without the services of returning state medalists Curt Randall and Trent Hixson. Placers for the Skyhawks include: Caleb Lazure 1st at 106, Peyton Meink 3rd at 120, Korbin Meink 1st at 126, Stone Mendez 5th at 132, Alex Van Dyke 3rd at 152, Billy Higgins 2nd at 160, Eli Jansen 8th at 170, Danny Thompson 5th at 195, and Ben Altman 7th at 220.

Bennington won 6 individual brackets and finished 2nd at their home invite despite injuries and sickness that seem to be plaguing programs across the state.. Broc Hall at 120, Devin Delancey at 132, Jake Cluxton at 138 and Josh Pokorny at 145, Logan MacDonald at 152 and Jason Brunk at 285 all won their respective brackets. Returning state finalist Trevor Walton of Boys Town finished 2nd at 182, and former class C state finalist Levi Bridgewater of Auburn won the 113 bracket.

The Cozad Invitational was as close to a simulation of the B4 district as possible, with Scottsbluff and Holdrege being the only teams missing from the tournament. Plattsmouth, Seward, Aurora and Wahoo added to the strength of the tournament with Plattsmouth and Wahoo finishing as co-team champions. Plattsmouth finished with 3 champions, 2 runner-ups and 1 third placer while Wahoo finished with 2 champions, 1 runner-up and 2 third placers. Joe Ritzen of Chadron won 2-0 over familiar B4 foe Jorgen Johnson of Alliance in the 132 finals.