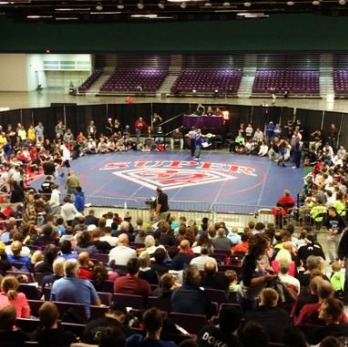 The wrestling community of Scottsbluff is notorious for traveling anywhere and everywhere to get mat time. Four Bearcats will be competing at the Super 32 Challenge this Saturday and Sunday in Greensboro, North Carolina. 11 Nebraskans will join more than 1,600 wrestlers from around the nation to battle for the Super 32 belts that look similar to the UFC championship belts.

Three of the Four Nebraskans competing at 120 pounds are in Class B and will likely end up in the 120-132 range during the high school season. Weigh ins are held Friday night which allows wrestlers to cut a little more weight as they have more recovery time. This explains why Devon’Tae Gutierrez and Mario Ybarra of Scottsbluff are competing at the same weight. With Scottsbluff seeking a team title in Class B, it is certain that they will compete at different weights during the high school season. Also at 120 pounds, Clayton Glendy placed third in Class C last season and is hungry to test himself against the best in the nation. Korbin Meink competed at Fargo this past summer and will bolster his resume with a good performance this weekend. He’s currently undecided on a college with a few official visits left if he chooses to take them.

Ben Rodriguez of Scottsbluff will compete at 132 pounds, which is the same weight where he won a 2015 state title. He competed at 138 during the 2016 season, but with the added recovery time via night before weigh ins, making the drop to 132 makes sense.

Two of Nebraska’s top 106-pound wrestlers from last season, Blake Jackson and Joey Harrison are competing at 106 pounds and 113 pounds respectively. Both have plenty of experience competing at national tournaments and have the mental fortitude to withstand the grind at a high level.

Jaydon Elge returned to competition at the Grappler Fall Classic on October 1st after suffering a freak injury in late January. He moved past the jitters that come from recovering from an injury, and placed seventh at 152 pounds. Elge has expressed that he felt undersized at 152, and will compete down at 145 this weekend.

Bryce Jackson and Paul Garcia seem to be on the mat year round, so why wouldn’t they compete at the Super 32 Challenge? Both wrestlers have competed all over the nation and have steady and scrappy styles. Those characteristics will need to be on full display to advance deep into such an elite tournament,

Nebraska’s lone competitor in the elementary division is a real treat to watch. Miles Anderson is savvy, explosive, and can scramble better than many high school wrestlers.

All in all, these wrestlers representing Nebraska know they are going into a meat grinder of a tournament. Firing on all cylinders will be a must in Greensboro.