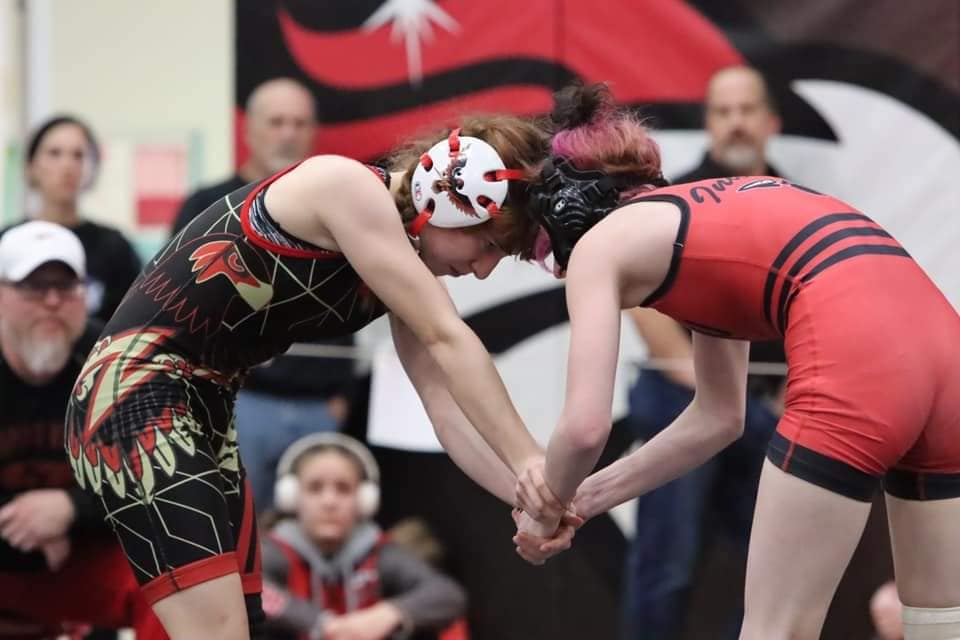 First of all, congratulations to Lucie for picking up a new sport, improving greatly throughout the season and qualifying for State. Lucie is a foreign exchange student from Toulouse, France.

She collected her first contested win in week three, after losing all of her matches it the opening two weekends. She has a winning record since that week. Catch her on the mat in Omaha as one of TWO 100 lb State Qualifiers for Head Coach Neil Bowman and the Johnson County Central Girls Wrestling Team.

Where in France are you from?

Lucie: I am from a pretty big city named Toulouse, in the south of France.

Do they offer wrestling where you’re from in France?

Lucie: We do have wrestling clubs in France, but it isn’t a popular sport at all. I had heard of it before, but I don’t know anybody in France that wrestles. It is way more famous here in the US than there. I had never seen a wrestling mat or a wrestling match before I started wrestling.

Why did you decide to try wrestling?

Lucie: I kinda wanted to do something, to be involved in an activity, but I didn’t want to do basketball. A friend of mine was wrestling and convinced me to try it, which is what I did. She took me to practice one day, and I actually liked it. The other wrestlers were nice, the coaches seemed nice too, so I decided to keep going to practice.

What did you think of wrestling when you first started? And how your perspective changed throughout the season?

Lucie: At first I wasn’t sure I wanted to do this sport, I didn’t know anything about wrestling, and had never done anything alike. Then, I saw how much work it requires, and now I think that it is a great sport.

Johnson County Central Coach Neil Bowman is happy she stuck with the sport. He had high praise for his wrestler and her toughness. “She is both physically and mentally tough. Not only handling the stress of being in a new country and away from her family and friends. She is also our leader for current female athletes at her weight in the 40 yards dash and pro agility and was named January’s Lifter of the month.”

How did it help having a tough practice partner like #2 Jocelyn Prado?

Lucie: Having her as a practice partner made me work hard everyday. She is a really good wrestler and pushed me to get better. I was always trying to do as good as she does. She was very helpful too, she explained a lot of moves to me or gave me a lot of advice.

Assistant Coach Kuhl added “Being a foreign exchange student as well as no involvement in sports prior to wrestling this season, I have been very impressed with Lucie’s commitment, work ethic and overall athleticism. The girls on this team all work very hard, and are a huge part of Lucie’s as well as each other’s success.”

Both Lucie and Prado are both state qualifiers at the same weight of 100lbs. They finished 1st and 3rd at the District Tournament. Prado and Lucie have wrestled FOUR times throughout the season in competition, including the district semifinals. Lucie bounced back from losing that match, and punched her ticket to the state tournament.

What was going through your mind after qualifying for state?

Lucie: I was really happy, proud and excited to qualify for state. I was really happy because it shows how much I’ve improved during the season. It also represents all the efforts I’ve put into wrestling, and all the work I’ve done at practice. I was proud of myself, but also proud for my coaches, because if I got this far it’s mostly thanks to them. I was also really proud of myself because my last match, to get 3rd place, was against a girl from weeping water that I had wrestled at the very beginning of the season, and she had pinned me pretty fast, so winning this last match against her showed how much progress I’ve made during those few months of wrestling.

Coach Bowman said that “Lucie has proven to be incredibly coachable, which was very noticeable in her 3rd place match at districts. We had a game plan for when we’re on our feet that she was willing to listen and execute that made a big difference.”

Were there any key moments throughout the season that made you see growth in yourself or believe more in your wrestling abilities?

Lucie: The Fairbury tournament {Week Three} was pretty important for me, because until then I had lost all my matches. But that day, I got my first and second wins, I pinned a girl for the first time, and got 4th place. That day I saw that I could actually do it and that I could win matches. It showed me that with hard work I could do it and be good at it, so it gave me more motivation too. Qualifying for state was also a great accomplishment that showed me that all my work was worth it.

Assistant Coach Rulla said that Lucie is “probably one of the hardest workers in the practice room, and is a able to push herself beyond her limits”

How do your parents and family feel about you wrestling?

Lucie: They’ve always been pretty supportive with me, whatever activity I would try, they would be happy for me and wish me the best, and so they did with wrestling. They were excited about me trying something new, something I had never done before. My dad was kinda scared that I would get hurt, but my parents still supported me. My brother was actually pretty impressed, he never thought I would wrestle or even be able to wrestle, but now his opinion has changed a lot.

Coach Bowman is obviously thrilled about the impact that she had on the team and to see her success pay off. “Lucie was a perfect fit for our girls’ team this year. She was tough enough to take the growing pains and smart enough to catch up with our girls that already had a couple years of experience. She has been an excellent example for all our High School, Junior High and Youth wrestlers. How much she has grown as a wrestler from the being of the season until now has been amazing to watch. She is a great example for our whole team of what you can achieve with hard work.”

“I’m very proud of and happy for Lucie”