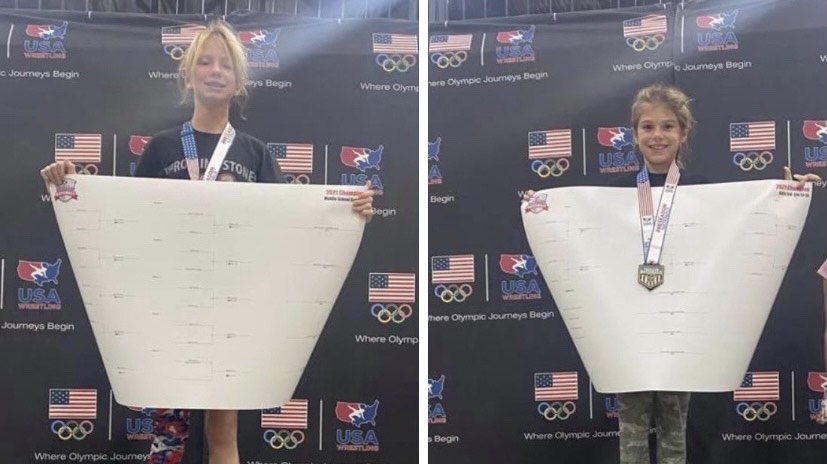 There were three Middle School Girls Champs. Mia Anderson had an exciting conclusion to her tournament to win the title, getting a reversal and then nearfall in last minute of the match to win 7-6. Kaylyn Harrill dominated her three matches, winning two by fall and the third match she was up 8-0 in the first period before her opponent forfeited out. Makayla Vasser won her division with an 11-6 decision in the opening round, before notching two straight 38 second falls. Mara Vanderpool finished third, with her lone loss coming to the eventual champ.

In the 3rd-5th division, Jaelyn Anderson (Mia’s sister) picked up two wins by fall, and another by 11-0 major decision to capture the title. Madyn Overman was runner-up in the biggest bracket in the in the 3rd-5th and MS Girls divisions.

Ahead of the first HS Girls Season, Nebraska had four All-Americans. Regan Rosseter was the highest finished in third place. She dropped her QF match to the eventual runner-up before rattling off four straight wins to finish third. She won a 4-2 OT match to get into 3rd/4th, and 6-5 to win third place. Maycee Peacher will be making waves in Nebraska her freshman season. She went 4-2 at 106 to finish fourth place. Reagan Gallaway went 4-2 as well to finish in 5th place, while Alexis Pehrson went 4-3 to finish 6th.

At the Middle School Boys level, Zaiyahn Ornelas continued his fantastic wrestling. He won a 34 man bracket at 92 lbs at the Middle School level, surrendering just one point along the way. There were two third place finishers in MS. Tyler Harrill went 4-1, dropping one close match to the eventual champ. Mason Petersen lost a nailbiter in OT to eventual champ and came back to finish 3rd, going 4-1. Brock Goebel finished 6th, and there were three MS 7th place finishes: Cole Caniglia, Kiernan Meink and Riley Johnson.

The HS Boys were broken up into 9th-10th and 11th-12th. Logan Edwards made the finals at 113 in 11th-12th division before dropping a hard fought 2-0 match. The other two upperclassmen AA’s were Josh Colgrove and Cam Cunningham, who squared off for 7th at 170 in a match won 1-0 by Colgrove.

The 9th-10th division had two finalists in Henry Reilly and Noah Blair. Reilly won four matches to make the finals, and lost a close 5-3 match for the title. Noah Blair cruised to the finals, before dropping a decision to a Minnesota state runner-up in the finals. Nebraska had two 6th place finishers in Miles Anderson and Grant Schwerdtfeger, and two 7th with Sam Andres and Isaac Ekdahl. Ekdahl avenged a previous loss to capture 7th.

In the grade school divisions, there were two additional 2nd place finishers. Landon Rosenthal was the highest finisher in the 5th-6th age group. He went 3-1 to finish second. Wesley Martin went 4-1 to finish 2nd at 3rd-4th 59lbs. Grant Berry was the highest finisher in 1st-2nd, finishing in 4th. Jaxon Peterson followed brother Mason to the medal stand with a 5th place finish. 5th-6th graders Ace Schweitzer and Cole Kansteiner both finished 7th and Carter Matthias finished in 8th in 1st-2nd.