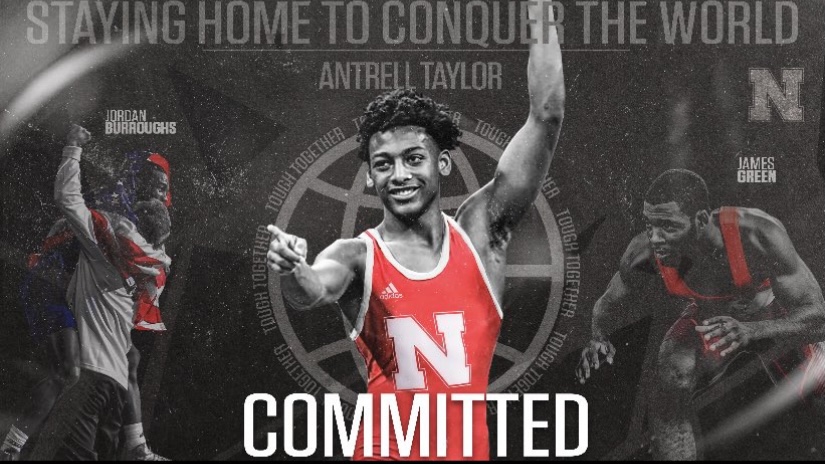 Tuesday was going to be a big day in Nebraska with the election, but Antrell Taylor stole the show. Tuesday night he made his commitment to the Huskers where he will continue his wrestling career. The 2019 State Champion is ranked as high as #6 by Willie Saylor and FloWrestling. Taylor chose Nebraska over programs like Ohio State, Virginia Tech, and teams such as NC State and Iowa State where Millard South teammates Isaac Trumble and Conor Knopick will compete for.

Taylor started wrestling at a young age and has been mentored by one of Nebraska’s best wrestlers in state history, Todd Meneely. He spoke very highly of Meneely saying “Todd is basically like a father to me. He helps me through everything, on the mat and off. He is just a really good guy”. Having Todd in his life helped lead him to Millard South. Wrestling for Todd, Jay Meneely, and Nate Olsen means a lot to him. “I like wrestling for them. There is a lot of tradition, we’re like a big family.”

When Taylor is not competing for the Patriots, he wrestles for Nebraska’s premier wrestling club, MWC. He has honed his Freestyle and Greco skills there. MWC has led him to a Fargo Freestyle runner up finish in 2019 and a UWW U15 Freestyle world runner finish up that same summer. Wrestling for MWC has brought out the best in him. He says “Zac, Matt, and Dane each bring out something different in me and help in a different way. Also wrestling there, I get the best wrestling partners in the state.” Antrell will continue wrestling for them and he hopes that he will get to wrestle in Fargo again next year. He is hoping to earn an invite to FloWrestling’s’ “Who’s Number One.”

Taylor committed to Nebraska because of relationships. He said “Coach Manning and Coach Snyder are really good guys. I fully trust them. I think they are the ones that can help me reach my goals.” He also mentioned having relationships with Nebraska wrestlers, Ridge Lovett, Kevon Davenport, and Isaiah Alford. One card Nebraska had in their back pocket, is arguably the best wrestler in USA history, Jordan Burroughs. Monday night Burroughs reached out to Antrell and talked to him about what Nebraska did for himself. That was a big moment for Taylor, as he says Jordan Burroughs is who he molds his wrestling style from. Taylor also mentioned staying close to home and being able to look up in the stands and seeing his family there to support him.

As far as wrestling goes, Taylor thinks the move to D1 will go well “I think I will transition pretty well. My style is similar to JB. I like to shoot double legs and low singles. It helps that I’m fast.” Taylor says his strengths are on his feet as far as what he needs to work on he says “I have to work on my top and bottom wrestling. On top, I usually just cut the guy.

We still have two years before we get to see Taylor wear the scarlet and cream. He said he will continue to push for MWC teammates Garrett Grice and Tyler Antoniak to join him at Nebraska. There is a lot to look forward to in Nebraska, the future is bright!