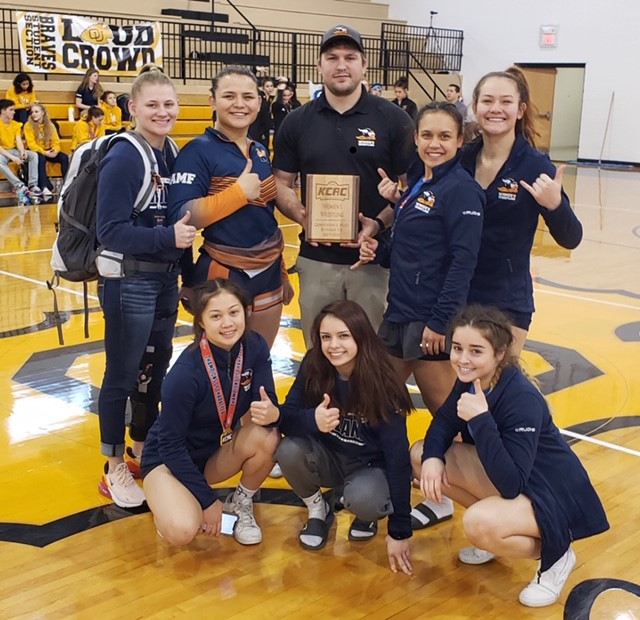 Ashley Gooman, a freshman from Ewa, Hawaii, had two 10-0 tech falls to take home the championship at 116 pounds.

Freshman, Avery Thomason, from Ripon, California was able to finish in fourth place at 123 pounds.

At 155 pounds, Mahealani Lewis, a freshman from Kailua, Hawaii finished in third place.

Leilani Comargo-Naone, a senior from Nanakuli, Hawaii finished in third overall at 191.

Coach Atwood, was very impressed with his teams efforts. “We’re not as deep as we would like to be, but the girls fought hard and made drastic improvements this season.”
Coach Atwood said. It will be a good stepping stool for next season with such a young team. Midland has a lot of talented freshman and has built a solid foundation.

Midland will look to build off the momentum from the conference tournament at nationals. Atwood said, “We would like to finish top ten as a team in the finals. I think we could get four or five in the finals.” It would be a great finish in his first season. Midland is a new program so finishing in the top ten would really make a statement for the future.

When it comes to leadership of this team, it was going to be difficult with such a young team. Atwood has been impressed with what he has seen though. He said, “Tanalei and Leilani have done a number on our team from a leadership standpoint. We have a great group of talented freshman as well, they are really coming along together well.” It will be fun to see how this team finishes up.