Freshmen to Watch at the 2020 State Tournament 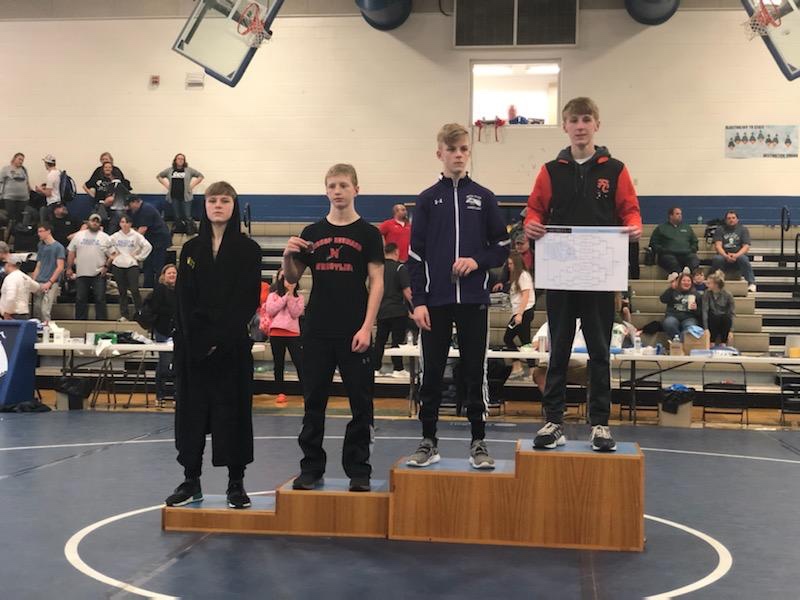 While there are many amazing freshmen competing at the state tournament this year, we will spotlight the ranked wrestlers and a few other candidates in each class who are in good shape to grab a state medal.

Kael Lauridsen is the lone top ranked freshman heading into the state tournament. He is unbeaten on the year.

In Class A, there are five freshmen in the rankings who qualified for the state tournament.

The two highest ranked freshmen are Adrian Bice and Joel Adams who are both ranked third in their respective weights. Bice has an excellent shot at reaching the state finals at 106 as he is on the opposite side of the bracket from the top two ranked wrestlers. It looks like Bice could see fellow ranked freshman Tyler Durden in the semifinals. Adams will have a tougher road that goes through #4 Rubino and #2 Haynes. He does have a close win over Rubino this year.

At 132 Michael Meyers looks like a good bet to make the heartbreak round. He’d need to pull a minor upset to medal, but he’s in the conversation at this weight.

Norfolk 145lb freshman Jacob Licking has the least amount of losses in his quarter of the bracket. If he can win those first two matches he will capture a medal.

Trace Marco and Tyler Stewart are two freshmen at in the higher weights to watch for in Omaha. Both have had stellar seasons in weights dominated by juniors and seniors. Stewart made the Metro Conference finals at 182.

A few others to watch are Bonam at 106 and Bates at 120. Both will be underdogs in their first matches, but are capable of coming back through for medals.

Adrian Bice won the A3 district title and has a great shot at making the state finals at A106.  (Photo Credit: Brian Brownlow)

Bennington standout Kael Lauridsen leads the way in Class B and the state as he’s the only top ranked freshman heading into the state tournament. He has wins over most of his top competition at 106 in Class B.

Ashland-Greenwood’s Blaine Christo has a shot at making the semifinals against Lauridsen, but will need to pull off a first round upset and win a tough quarter to get there.

At 113 there is a ranked freshmen trio in Kort, Parrish and Prados. Kort and Parris could very well meet in the semifinals with a shot at a state finals match on the line. Prados could see #1 Chavez in the quarters, but even if he drops that match has an excellent shot to come back through for a medal.

Pierce’s Jayden Coulter is one of our contenders at 120lbs. Expect him to pick up some wins at the state tournament for the Bluejays.

Landon Weidner of Hastings has proven himself to be the top challenger to #1 Dyson Kunz. It’s a little unfortunate that those two will likely meet in the semifinals.

At 160 we have #7 Zander Schweitzer of Pierce and Alex Anthony of McCook. Schweitzer has a tough first round match, but if we can win that one would be favored in the quarters. Anthony could pick up a few wins as well at this weight.

To round out Class B we have Lakeview’s Landon Ternus at 170. He has picked up 33 wins in his freshman campaign.

Kael Lauridsen is both the only top ranked and unbeaten freshman this year entering the state tournament. (Photo Credit: Bennington Wrestling)

In Class C there are seven ranked freshmen, all in the lightest two weights.

The largest group of ranked freshmen in the state comes by way of the C106 weight. We have five ranked wrestlers in Olberding, Waddington, Ohnoutka, Brandt and McGee. There are also three others who are in contention for a medal in Hernandez, Johnson and Luther. At C106 there are no returning state medalists so there will be plenty of freshmen looking to break through in Omaha.

At 113, Schademann and Olberding will both have difficult quarterfinal matches, but regardless of the outcomes on those should still have decent opportunities at medals.

We jump all the way up to 195 where we have pinning machine Quran Cook in the field. He has been ranked during the season and is a medal threat at this weight.

Daven Whitley rounds out our contenders. He made the move up from 220 and it paid off big time. He doesn’t have a ton of matches, but if he has a good tournament can bring home a medal.

Plenty of other Class C freshmen in the field in Omaha. 120 has Lurz of Valentine, Baker from St. Paul and Arlt from Yutan who all have bright futures. GICC’s Ben Alberts made it out of a tough district at 145 as did Rittgarn of Gordon-Rushville at 152 C4. Quad County’s Kolby Casey joins Cook as a freshman qualifier 195.

The Class D ranked freshmen are a little more spread out than the other classes. There are two at 106 with Dane and Bohac and they are probably going to meet up in the quarterfinals on Thursday.

Pender’s Braxton Volk has a solid shot at making the semifinals at 113. Mullen’s Eli Paxton moved up from 106 and won a district title and would meet up with Volk in the quarters if they both win in the first round.

Nicholas Kuehn was a district champion and is in a fantastic position to make the semifinals if he can get past the winner of the all-freshmen battle in the other first round match between Kohel of Morrill and Smith from Elkhorn Valley.

Connor Wells at 126 for Anselmo-Merna lost a close 4-3 match to his first round opponent Rainey. If he wins that one he should be set up well for a state medal.

Neligh-Oakdale has a pair of middleweights that will contend for medals. At 138 Austin Rudolf has beaten several ranked wrestlers this year. At 152 Aiden Kuester is a state finals contender. In the semifinals he could see returning finalist Gunning. That matchup went into overtime at districts.

At 195 we have district champion Jestin Bayer. Bayer’s first action this season was at 160 and after missing some time he is up at 195 with a district title under his belt and a chance at a state medal.

One thought on “Freshmen to Watch at the 2020 State Tournament”