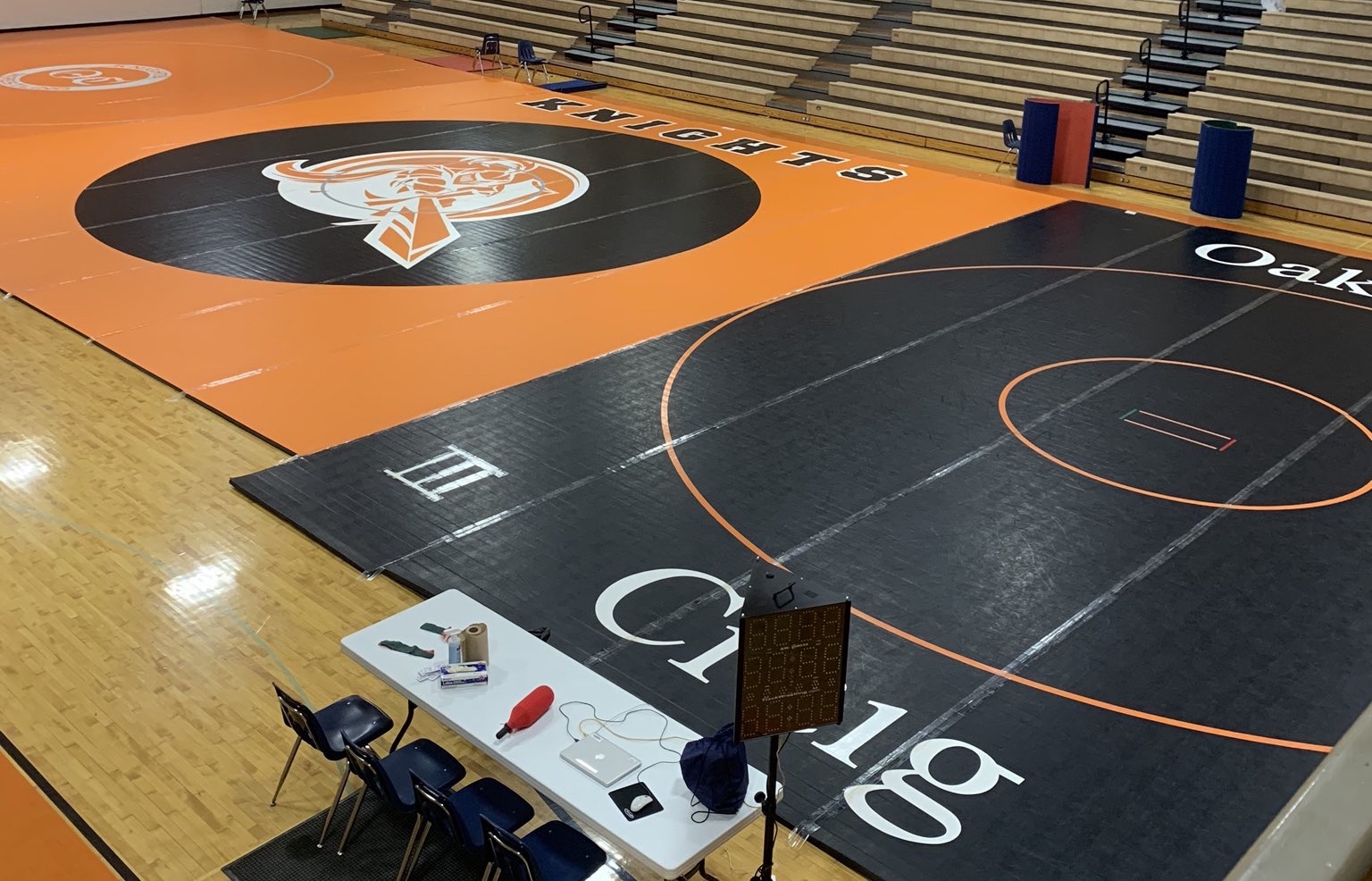 Aquinas enters the district set up to potentially qualify 12 out of 14 weights, with a realistic chance at pushing 13 through. They should lead the way in a team race that includes two additional ranked teams. Conestoga, who isn’t ranked, looks like the bet bet to challenge Aquinas. They’ve looked sharp in recent weeks, beating #6 Logan View back to back days last weekend. Milford got bit by injury bug a little bit this season, but do get a strong piece of their team back at 120. Aquinas, Conestoga and Milford finished in that order at the Aquinas Invite so not only do we have a good idea of how they’ll finish at the district, but we do have some common opponents between the teams to gauge the individual weights. Raymond Central and Wilber-Clatonia should push Milford for that third spot.

There are 28 ranked wrestlers in the C2 district. Eight of those are back to back at 120 and 126. 170-195 appear to have some spots that are up for grabs so maybe we’ll see some weight shifting or new names come up in the next few weeks leading up to districts.

UPDATE: Aquinas capture the state dual title and battle district foe Raymond Central in round one. The Monarchs continue to pick up steam as the season progresses and they could come close to qualifying their whole team! Conestoga and Milford looks like the battle for second with Wilber-Clatonia not far behind. C2 now has 26 ranked wrestlers after the most recent rankings.

Please send any suggestions, updates or corrections to dru.kastler@gmail.com, KastlerDA on Twitter, or simply comment on this post. We will update these predictions the week of districts to include the next few weeks of competition. Records were pulled from Trackwrestling and may not be 100% accurate, but for the most part should be current as of 1/30. These records do not include 1/31.

UPDATE: Barger picked up a second win over Hemmingsen recently. Very important 4/5 quarterfinal match on Friday at this weight.

113:
Schluckebier has a couple common opponents over Dozler and will be the top seed in the district. Dozler has a win over Williams from Conestoga by fall. Jaimes has common opponent over Kavan. Kavan beat Williams 2-1 in previous meeting this season and they could see each other in a big district quarterfinal math.

UPDATE: Dozler picked up a nice win over B#6 Bolling and showed that he should be among the top guys in Class C. Same scenario as 106 where the 4/5 quarterfinal will be a huge step in qualifying for state.

120:
Albrecht hasn’t lost at 120 yet this season. He has wins over Ruffner in December and Vandenberg of Aquinas in early January 4-1. Vandenberg has a head to head win over Ruffner. Freshman Burt from Tekamah has head a great year, with his only losses coming to A and B wrestlers. A new wrinkle at this weight as state qualifier Vondra is returning from injury and should challenge the top group. Vondra was a match away from a state medal at C113 last year.

UPDATE: Vandenberg avenged earlier season loss to Albrecht with a 7-4 win at the state duals. Burt now has a common opponent over Ruffner so those two have been switched up in the 3/4 spots. Vondra is offically competing again making this weight more interesting.

126:
Back to back weights now with four ranked in the top eight. Zegers really impressed with a commanding win over Zitek a few weeks ago. Zitek defeated Chini by major decision in the same tournament and could get another crack at Zegers in the district finals. Zitek’s path will likely go through Patak of Wilber-Clatonia. They haven’t met, but Zegers has a win over Patak. Returning qualifier Grape returned to the lineup recently so he’ll be in the mix.

UPDATE: Chini now has common opponent over Patak with his win over Wegrzyn from Lincoln Christian so those two have switched.

132:
Bryce beat Williams in OT in their lone meeting of the season. They seem like the clear top two at this weight. Bryce has also beaten Lokken of Wilber-Clatonia and Stauffer from Milford. Scott from Aquinas has a common opponent over Lokken. Lokken beat Stauffer 3-1 in a December meeting between the two. Williams is coming off of a win over #2 McNulty so his ranking will go up in our next set. Poppe hasn’t seen any of these guys in his weight which makes him hard to predict.

UPDATE: Lokken picked up a big win over Harris of David City. Harris beat Williams at state duals. Scott has the common opponent over Lokken. Should be a dog fight for second and the seeds for this weight will be interesting to see play out. Poppe will cause some problems for the top guys here.

138:
Nickolite has had an impressive sophomore campaign. His only loss coming opening weekend. Homolka of Wilber-Clatonia and Sauser from Crofton/Bloomfield each made the drop to 138 in early January. Homolka has a couple common opponents over returning qualifier Chapman. Sauser has a major decision win over Hilliard and common opponent over Grape.

UPDATE: Homolka has been impressive at 138 and has entered the most recent rankings. Sauser has common opponent over Grape. Jaemes Plowman of Conestoga has impressed recently and has a shot at qualifying.

145:
Lampman leap frogged returning state runner-up Scdoris in the rankings recently as he has a head to head win over #3 Smydra who beat Scdoris. The only Class C wrestler Lampman has lost to is #1 McGinley. Scdoris has convincing wins over both Schrad and Dragon. Dragon has common opponent over Schrad. Challengers Verzani and Hollandsworth have split. Hollandsworth has a head to head win over Uhing.

152:
Hinrichs made waves by making the drop to 152 last weekend and immediately picking up a win over #1 Zoucha. That give him common opponent criteria over Kreikemeier from Raymond Central who lost in OT to Zoucha. Kreikemeier beat Eller head to head. Moldenhauer is a returning qualifier and should be the fourth seed. Schafer and Ohlrich add some quality depth to the weight, but will need to pull off an upset to crack the top four.

UPDATE: Hinrichs is the guy to beat at C152. Kreikemeier and Eller should meet in the semfinals as the two have traded wins with each other now and will get the rubber match at districts.

160:
Kunc has just two losses in somewhat limited action this season. Formerly ranked Karpov has been out of the lineup for Raymond Central the past few weekends so we’ll monitor his status. Parsons from Conestoga has been at 160 and 170 so far this season so he could end up at either weight. Springer moved up from 152 after teammate Chris Scdoris was injured for the year. Parson won over challenger Eickmeier by fall.

UPDATE: Karpov has been out with injury and it’s unlikely he will be competing so we’ll take him out. Clear top four at this point, will anyone bump up?

170:
Kment and Maline are both returning qualifiers. They might not be in the top eight, but are right on the edge of cracking the rankings. Maline’s record may be deceiving a little bit as he got a late start to the season and all of his losses are to quality opponents. Soden and Vance have split. Cleveland and Palmer appear to be the remaining two winning records. They also have spent time at 182 so they might bump up.

UPDATE: Order at this weight stays the same. Cleveland has been wrestling well lately and should be right in the mix for a top four finish.

182:
Second weight in a row where the top two seem relatively obvious. Reilly Miller from Aquinas might be the only remaining winning record at the weight unless we seem Cleveland or Palmer up here. Looks like all of Dather’s losses are to wrestlers with winning records so he seems like a solid bet to get top four. It will be important for him to get to a .500 record in order to avoid being drawn in. There could be others that emerge as this weight in the next few weeks so keep an eye out for the update prior to districts.

UPDATE: Thornburg from Raymond Central has been down at 182. Miller of Aquinas won that head to head match. Anthony Palmer at 170 has a head to head win over Miller so we’ll see if he decides to go 182.

195:
Sensing a theme here, third weight now that we have a clear cut top two and a wide open race for the remaining spots. Thonen beat Schultz head to head so barring anything crazy, he’ll be the top seed. Casey has the next best record after the top two. One of his losses is to Dather who is down at 82. Pretty difficult finding additional winning records at this weight, but Thornburg sits right at .500. Will be watching this weight closely to see if anyone else enters the conversation at 195.

UPDATE: Weber of Boone Central has two wins over Tramp so we’ll move him into the fourth spot.

220:
Beaver’s only losses are to D#1 Throener, B#3 Meyer and future Husker football player Nash Hutmacher. He’s also beaten Throener and D#3 Gale along with numerous other quality wins including one over district foe Jared Janssen. Beaver’s wins over Gale and Throener give hin two common opponents over Johnson of Madison. Johnson beat Janssen head to head in his first match of the season. Fourth spot seems like a race between three wrestlers; Meysenberg, Avila and Temple. Meysenburg owns a 6-0 win over Temple and Avila hasn’t had many matches at 220 yet, so we’ll go with Meysenburg in the fourth spot.

UPDATE: Johnson recorded a head to head win over Beaver in overtime. Looking at the overall body of work this season Beaver still appears to have a slight edge. 220 has a ton of state title contenders and should be one of the most exciting weights to watch in Omaha.

285:
Whitley has a win over McDuffee. McDuffee has beaten Schramm. Escobar has common over Smith. Smith has common over Schramm. Schramm has common over Escobar. If that even still make sense at this point, we have five really tough 285 guys going for four spots. What makes things even more difficult to predict at this weight is all of these guys have an odd loss or two on their record. It will be interesting to how the seeds shake out. Perhaps things will become a bit more clear the next few weeks. Whitley has made 220 so maybe he’ll go down again, but his last few meets have been at 285. In all honestly you could probably wrestle this weight ten times and see different match results each time. For now we’ll give the edge to the upperclassmen.