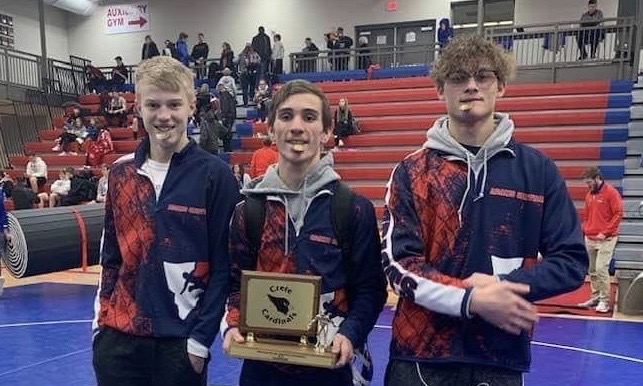 Class B Wrestler of the Week – Week 2
Grady Griess, Northwest – Griess took his talents on the road to arguably one of the toughest tournaments in the Walsh Ironman Tournament. Griess finished in 5th place and is only a handful of Nebraska wrestlers ever to place at this tournament. During his run, he had four straight matches against kids ranked in the top ten in the nation. He won two of those matches and lost the other two by a combined four points.

Class B Team of the Week – Week 2
Adams Central – The Patriots had 10 of their 12 wrestlers medal at the Crete Invite which lead them to the team title over Milford 162 to 149. The Patriots were led by champions Tristen Obermiller (106), Devon Ackles (120) and Cameron Kort (138). Freshman Braiden Kort finished in second place falling the in the championship match to Salat from Omaha Bryan by a 6-4 decision. Earlier in the week, the Patriots moved to 2-0 in their season duals posting a 42-28 win over Holdrege with six of their eight wins coming by fall.

Class B Underdog of the Week – Week 2
Hayden Schalk, Nebraska City – After starting the season off with a 6-4 loss to #1B Ourada, Schalk went undefeated on the opening weekend at the Friday Night Fracus in Nebraska City. This past weekend, he again caught fire and finished in 9th place at the Council Bluffs Wrestling Classic. After losing to the #4 6A wrestler in Iowa early in the tournament, he avenged the loss in the 9th place match with a UTB 1-0 win. He also defeated the #5A wrestler in Nebraska during the tournament.

#2A Columbus defeated #2B Hastings 42-28. Columbus shuffled DeAnda and Grape and then used their light weights to take a lead they never looked back from.

Crete Invite
Adams Central had 10 of their 12 wrestlers medal which lead them to the team title over Class C Ranked Milford 162 to 149. The Patriots were led by champions Obermiller (106), Ackles (120) and C Kort (138). Central City finished in third place with two champions – Kunz (132) and Moore (160). Seward finished in fourth place while Waverly came home in fifth place.

One thought on “Class B Week Two Recap”