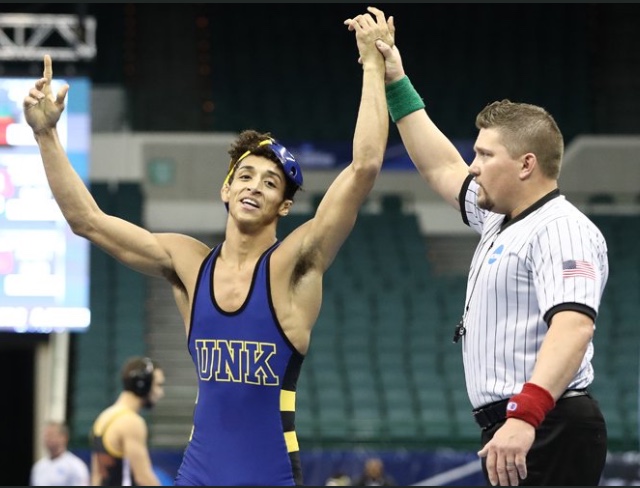 Nebraska Kearney is coming off one of the best seasons in program history. They won a conference title, regional title, and finished fifth in team points. They didn’t win a national title, but they got four guys to the finals. Josh Portillo, Matt Malcom and Nebraska natives Wes Dawkins from Lincoln High and Jarrod Hinrichs from Fillmore Central. Malcom was the lone National Champion. All four will be back this season as Kearney tries to take down St. Cloud State and become the new kings of Division II wrestling.

The lopers will be looking to fill in half of their line up after the graduating departures of Nick Babcock at 149 pounds, Calvin Oaks at 165, Zach Stodden at 174, Isaac Deaton at 184 and their two 197 pounders, Trey Schlender and Brady Radik. The good thing for Dalton Jensen’s squad is they have built plenty of depth. This weekend will be a good spot to start with the Blue-White dual on Saturday. Top to bottom, you will see lots of action and great matches. The highlight of the day will come at 285 pounds. The Lopers have returning national runner up Hinrichs wrestling against Pan-Am Games Champion and Kearney graduate, Lee Herrington. Herrington got his name put on a map this summer when he pinned World Team member Colten Schultz at the UWW Junior Greco Championships. It will also be the first time we get to see returning National Champion, Matt Malcom in his new spot in the lineup, 165 pounds.

Having all four finalists back is a good place to start when taking a look at their lineup. It is something Coach Jensen is very happy to have, “Last year was a very unique year, having four finalist is pretty rare. Having them all back is comforting as a coach. There is experience all across the board. It really motivates the team. In practice at some point, all these guys are going to get to wrestle a national finalist. It should be a motivating factor for these guys.” UNK will also return Jonathan Killingsworth, who fell just short of nationals finishing in fourth place at regionals. Walker Johnson also returns after seeing action in the MIAA duals last year.

With four returning finalist, the Lopers are in great shape when it comes to leadership. Having an older team helps Coach Jensen sleep better at night. “Having these guys makes it easier on me. These guys are good leaders on and off the mat. I know they are going to make the right decision. Another thing about this group, we just had our highest team GPA in years. So their leading in good ways and setting the right example” Jensen said. It is up to the older guys to set an example. It is a trickle down effect. When young guys see that example, they know they are held to a higher standard. They dont want to be the ones that send a program in a downward spiral.

Kearney had a big recruiting class last year that included Nebraska state champions, Jackson Nielsen (Blair), Joseph Reimers (Aquinas), Kaleb Canoyer (Waverly), Nick James (Kearney), and 2017 champion Jack Sutton (Wahoo). They also added Jud Kuchera (Kearney), Wyatt Hayes (Scott City, KS) and Alec Segarra (Hill City, KS). Jensen like what he sees out of the group and cant wait to see them compete at the Cowboy Open. “This is the time of the year we are super eager to see these guys compete. We will get them in to a lot of opens. The kids coming in are going through a transition period. Their strength and condition has been good, their technique has been good, and they are well educated when they get here. Most of them will redshirt, but we are going to get them in these opens. They have been getting more and more impressive by the day.” Entering the kids in the opens is something Jensen is going to lean on to get these kids prepared for the future. He wants them to see the toughest competition and not shy away. He is always trying to find a loss for his guys. He believes if you go undefeated you have not found the tough competition out there.

Finding tough competition is something that Lopers have been doing for years. Also having great recruiting classes with well rounded wrestlers has helped build consistency in the program. It is something Coach Jensen takes pride in. “We have talent, and we have to continue to get talent. We have to get the right guys. Guys that wrestle when they are not competing in another sport shows they will buy in. It is hard to instill passion. When you see guys who are passionate about wrestling who are continuously working on it, going out and finding the toughest competition, those are guys I want. Those are guys who I know will compete and keep this program where it is. We are going to big tournaments and participate in big duals because I want to find a loss for these guys. It makes them better and it makes our team better. We also have incredible recovery training, sleep training and nutrition programs to keep these guys where they need to be.” He is definitely building a program that will last year after year to be a top notch program that everyone wants to go to.

UNK has been a program built on tradition. Three national titles. Five runner up trophies. Fifteen regional championships. 122 All Americans. 23 National Champions. One Olympian. Tervel Dlagnev graduated from Kearney in 2008. He was a two time National Champion for the Lopers, and helped lead the team to a National Title in 2008. This past year, Dlagnev was inducted into the UNK hall of fame. He has a familiar face, and is still loyal to the program. “Tervel is an awesome guy. He is probably the most under appreciated coach on the planet. When he was in town I made him coach a practice. He is one of the best minds in wrestling. He is very analytical and pays a lot of attention to detail. He is a great ambassador for the program. He always texts me before and after matches, and he still follows the program closely.” Said Coach Jensen. Having a guy like Dlagnev to show the kids that it doesn’t matter where you go to school, if you work hard and give it all you got anything can happen. You can be an Olympian.

Kearney will have wrestle offs on Saturday. It will be good for the team to go out and wrestle a scored match and compete. Some of the spots figure to be already filled but there is a lot of openings to be had. Between the wrestle offs and the Cowboy open, Coach Jensen will then determine a lineup for when they go to Lincoln. There could be a lot of different guys in the lineup but Coach Jensen wants to see what he has in order to put the best team out there when it comes down to regionals and gives Kearney the best chance to win a national title.