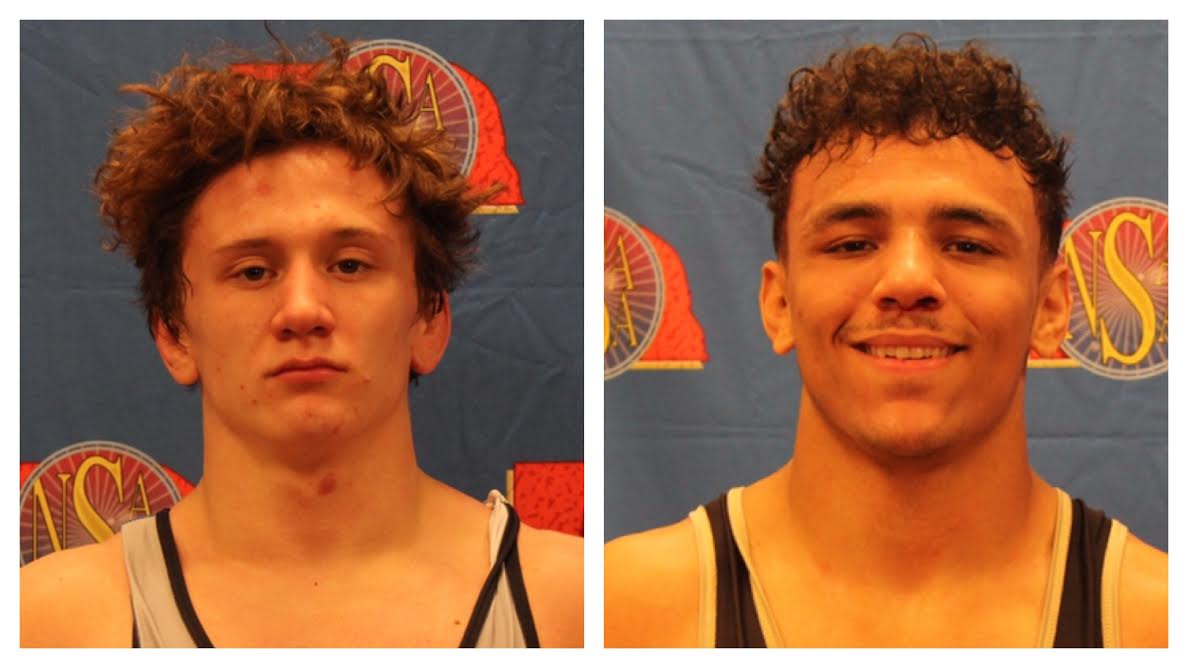 Grice followed up a runner-up finish at 106 last season, with a state title this season. He collected 14 falls and scored bonus point wins in all but 5 of his wins this season while battling an injury. After losing 4-4 in the ultimate tie breaker to Caleb Coyle (Millard South) in the district finals, Grice edged Coyle 3-2 in the ultimate tie breaker in the state finals. Grice was tested by Baustert in the state semifinals, as he won 2-1 in the first tie breaker.

Grice stepped on the Class A championship mat right after his older brother won his first state title, and won his own title with a hard fought 4-3 win over Emilio Haynes (Omaha Central).  He had a dominant freshman campaign, recording 36 falls and scoring bonus point wins in all but 5 of his wins this season.  In the state semifinals, he won 9-4 over Cushing (Grand Island) by staying calm and wrestling through a few precarious positions, and scoring at the end of the match to provide some padding to the final score. Grice had a very successful youth career, and is now on track to win four high school state titles.
120 Champion- Jakason Burks, Omaha Burke (Jr) 58-0

Burks won his second state title just a short while after watching his brother James secure his fourth state title. He recorded 37 pins on the season, and earned bonus point wins in all but 2 of his matches. Burks had a busy “off-season” competing in close to a dozen Freestyle/Greco-Roman tournaments, highlighted by a Cadet Freestyle Fargo National Title just days after returning from the Greco World Championships in Croatia. Burks was also the first Nebraska wrestler to compete at the Who’s #1 event hosted by FloWrestling, which pits top-ranked wrestlers against each other in a dual style format. Burks has five schools that he is planning to choose from to continue his wrestling career, including Iowa State, Ohio State, Oklahoma State, Minnesota and Nebraska.

After finishing 4th at 106 as a freshman, and 2nd at 120 last season, Russell capped his high school career with a state title. He battled injuries his sophomore season and wrestled up 2 weight classes to help the team, but did not qualify for state. In the 2019 state finals, he avenged 2 regular season losses to Ladamien Sturdivant (Omaha Bryan) with a 2-1 win in the finals. In the state semifinals, he avenged a 4-1 loss to Cody Niemiec (Papillion- La Vista) with a 2-1 win. Over the course of the season, he collected 22 falls and earned bonus point wins in all but 8 of his wins. Russell was on the mat year-round, and has competed overseas, along with dozens of preseason and Freestyle/Greco national tournaments and finished as an All-American multiple times. Russell joined his dad Chuck Russell as a Class A State Champion, as Chuck was the 126 state champion in 1984 for Millard North. Russell is planning to continue wrestling after he graduates, and is currently weighing his options.
132 Champion- Phillip Moomey, Kearney (Sr) 46-1

Moomey won his third state title, after capturing state titles at 120 as a sophomore, and 126 as a junior. Like Chance Fry, Moomey was in the loaded 113 bracket as a freshman, where he finished 5th. Moomey recorded 34 falls this season, and scored bonus point wins in all but 5 of his matches. Moomey was tested in the state semifinals by Kucera (Columbus) and by Taylor (Millard South) in the state finals after collecting falls in the first two rounds of the tournament. Moomey was a Fargo Greco National Champion and made the same Greco World team this past summer that Jakason and James Burks did. Moomey will continue his wrestling career at Cornell University.

Mayfield cruised to his second state title, after winning his first at 120 last season. Mayfield’s lone loss was in sudden victory to three-time state champion Phillip Moomey in a dual, and he avenged that loss at State Duals. Mayfield collected 42 falls this season and earned bonus point wins in all but 1 of his wins this season. At the state tournament, Mayfield recorded falls in the first round, quarterfinal and finals. Mayfield has been on a handful of college visits, and will likely commit to a Division 1 school this year.

James locked up his second state title, after winning his first title at 138 last season. James finished 3rd at 132 as a freshman, and 2nd at 132 as a sophomore. He suffered a torn ACL injury last spring, and spent the summer and early fall coming back from the injury. James’ only losses this season were to Fry and an opponent from national powerhouse program Apple Valley Minnesota. James recorded 20 technical falls and earned bonus point wins in all but 5 of his wins this season. At the state tournament, he earned a fall, tech fall, and major decision before winning 9-2 over fellow senior Levi May (Millard West) in the finals. James will continue his wrestling career at the University of Nebraska-Kearney.

Fry became the first three-time state champion from the city of Lincoln, winning his sophomore year at 132, junior year at 145, and this year at 152. Fry finished 4th at 113 as a freshman in a loaded bracket. Fry recorded 27 pins this season, with his closest match being a 13-9 win over Nick James (Kearney) who bumped up in a dual. Fry pinned his first 3 opponents at state and won 12-1 over Cole Price (Papillion- La Vista) in the state finals. Fry will continue his wrestling career at Iowa Western Community College.

Burks capped an amazing career with his 4th state title. He won at 132 as a freshman, 145 as a sophomore, and his last 2 titles came at 160. Burks recorded 45 pins this season, with his closest match being in the state quarterfinals where he held off a late surge from Jack McDonnell (Bellevue West) to win 9-8. Burks also made a Greco World Team this past spring, and placed 3rd in Junior Greco at Fargo just a few days after getting back from the World Championships in Croatia. Burks will continue his wrestling career at Northern State University in South Dakota.
170 Champion- Isaiah Alford, Lincoln High (Sr) 45-1

After not qualifying for state as a freshman at 145, Alford finished 6th at 170 his sophomore year. He then made a huge jump over the spring and summer to win a loaded bracket at 170 last season.  He beat two-time state champion Braiden Ruffin (North Platte) twice during the season, and went 44-0 on the season. Fast forward to this year, Alford collected 36 falls including 2 falls and 2 major decisions at state including a 16-6 win over fellow senior Cole Huss  (Gretna) in the finals. His only blemish on the season was a 6-5 loss to a nationally ranked opponent from Missouri. Alford won 7-3 against Grant Lyman (Lincoln East) twice throughout the season, but scored bonus point wins in the rest of his matches. Alford will continue his wrestling career at the University of Nebraska-Lincoln.
182 Champion- Isaac Trumble, Millard South (Jr) 56-0

Trumble moved up two weight classes from 160, where he placed 5th as a freshman, and finished 2nd as a sophomore last season. His two losses last year were to James Burks in the district and state finals. Trumble had a busy offseason, and competed at a handful of Freestyle/Greco tournaments and preseason tournaments. Trumble recorded 42 falls this season with his closest match being a 9-3 win over an opponent from Missouri. At state, Trumble’s closest match was an 11-0 win over AJ Muthersbaugh (Lincoln East).

Miller ran the table at 195 two years in a row, winning the state title his junior and senior seasons. As a junior, he only lost 1 match to an opponent from Iowa. He was the state runner-up at 182 as a sophomore, after not qualifying for state at 170 as a freshman. This season, Miller recorded 47 falls and his closest match was a 9-5 win over Josh Trumble (Millard South). Otherwise, he earned bonus point wins in the rest of his matches. Miller trained year-round through most of his high school career and was a Fargo All-American this past summer.  He will continue his wrestling career at Iowa Western Community College.

Before winning the state title this season, Grape finished 3rd at 182 as a sophomore winning 53 matches, and was a state qualifier at 182 as a freshman. Grape recorded 43 falls this season, and his state finals match was the only time (8-4 over Tony Pray of Creighton Prep) where he didn’t earn a bonus point win. His only losses were to Jesus Maganda of Schuyler (B220 State Champion) and Jaylon Walker (Omaha Bryan). Like many other Class A state champions, Grape has been active on the spring and summer Freestyle/Greco circuit for multiple years.

Cowling made steady improvements throughout his high school career. After not qualifying for state as a freshman, he went 1-2 at state as a sophomore, then finished 3rd at 285 as a junior.  He recorded 33 falls this season., and only 2 opponents from Nebraska kept Cowling to regular decision wins. Cowling won 5-3 over Josh Stallbaumer (Cozad) in December, and 4-3 over Jack Hasz (Creighton Prep) in the state semifinals. Cowling will continue his football career at Morningside College.