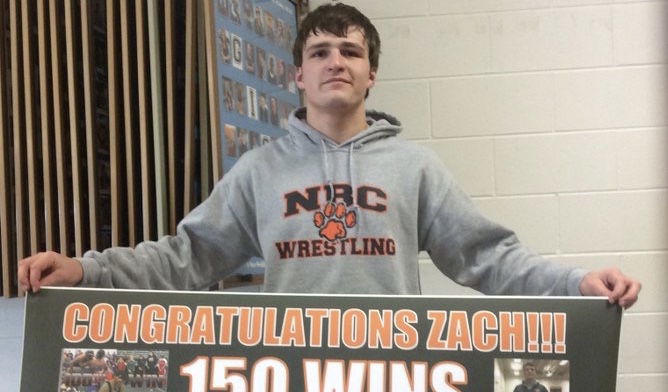 #1 Valentine: Won a very exciting dual over #2 Broken Bow 33-30 that came down to the last match. They were idle on the weekend and are back in action tomorrow night in a triangular with O’Neill and Winner, SD.

#2 Broken Bow: After coming up short against Valentine they beat a tough Sidney team and B#4 Northwest to win the Gothenburg Duals on Saturday.

#3 David City: Beat #5 Aquinas 33-31 on Thursday in another exciting dual. On Saturday they won the Cross County Invite over a tough Central City squad.

#4 Battle Creek: The Braves won their home invitational for the 11th straight season. They finished ahead of a surging Pierce team and D#5 Elkhorn Valley.

#5 Aquinas: On Saturday Aquinas finished 2nd at the Schuyler Invite behind B#7 Lakeview and finished ahead of #4 Scottsbluff, B#8 Schuyler, B#9 Lexington and C#7 Malcolm.

#6 Arlington: The Eagles were runner-up at their home invite to #8 Logan View.

#7 Malcolm: Malcolm scored 105 points at the Schuyler Invite with only 7 wrestlers in the lineup.

#8 Logan View: The Raiders continue to impress as they won yet another tournament title this season at Arlington.

#10 Ord: The Chanticleers won the Gibbon Invite without some of their starters in the lineup, including state medalist Rowse at 126 and qualifiers Shoemaker at 152.

113: One of the recent rankings additions #4 Cluff survived a 19-17 OT shootout with Bruns from Hershey. Zitek from Aquinas hasn’t wrestled since before the holiday break. Rankings contender Cooley from hasn’t been at 113 since before the break either, wrestling at 126 and 120. Bridgeport state qualifier Chance Cooper made weight at 113 once but was back up at 120 for the Chase County Invite. Oakland-Craig’s Alexander Smith has been wrestling well at 113 since after the break. He could see #3 Mueller this weekend.

120: #1 @ 113 Williams bumped up and notched two TD’s to win 4-0 over #4 Gaffney on Thursday. #1 McCracken won his home invite. #2 Gilmore won 5-2 over #5 Hernandez. #3 Zoucha has the win over Gaffney from the previous week and won the Schuyler Invite this week in impressive fashion. #6 Scott of Aquinas finished 5th at Schuyler. Rankings contender Boyce of Ord won the Gibbon Invite. Stanton’s Zak Hansen was at 132 before Christmas and is now wrestling 120.

126: Top ranked Carlson pinned his way through the Shelton Invite. #2 Faulkenberry went 3-2 at the Gothenburg duals, dropping a matches to B#2 Rocheleau and to B#4 Quandt after getting the first TD. #3 Schram beat previously unbeaten B#6 Perry to win the Schuyler Invite and should be considered a state title contender at this point. 4th ranked Rowse still hasn’t seen the mat since week two. #5 Harris won the Cross County Invite. Logan View’s Valencia won a wild 17-13 match 17-13 over #6 Zegers and won by fall over D#4 Janke. Zegers won the earlier season matchup over Valencia 10-3.

132: Top ranked Krolikowski won 5-3 over #3 Powers on Thursday in a dual, his closest match of the season thus far. Cross County’s 2nd ranked Graham continues to impress this season, winning the Cross County Invite with victories over #4 Valentine 9-3 and returning state champion Brandenburg by fall. For score comparison sake, #3 Powers has a 4-3 win over Valentine. #5 Feldner won by fall over rankings contender Petska to win the Gibbon Invite. #6 Lade won his home invite with three pins and two tech falls.

138: #1 Waddington pinned his way to a Gibbon Invite title, beating formerly ranked Shiers in the finals. #3 McNeill reversed the outcome of the High Plains finals match, winning 3-1 over #2 Kersten. Big weight drop with #5 @ 145 Copley going to 138 and knocking off #4 Mues in OT. #5 Widener didn’t compete at Chase County. #6 McGinley looked impressive in his dual clinching win by fall on Thursday. Rankings contenders Smydra from Norfolk Catholic and Jones of Twin River have split matches in recent weeks.

145: White won the Cross County Invite. #3 Miller won 2-0 over Hohn from Neumann who made the drop from 152. Garret Kluthe from Ord won 11-5 over #4 Rogers in the Gibbon Invite finals. #6 Schleis was a runner-up at Schuyler, dropping a 6-1 decision to B#1 Gutierrez.

152: Styskal dominated his way to a Cross County title on Saturday including a win by TF over formerly ranked Smith. #2 Heimes and #3 Verzani were both at the Battle Creek Invite but didn’t meet up as they both lost to D#4 Bloomquist. #4 Hinrichs won the Shelton Invite. Valentine’s Battershaw reversed an earlier season 5-1 loss with an 8-1 win over #5 Ulmer. #6 Thompson won the Gibbon Invite with a 1-0 win over rankings contender Daake. Battershaw has a 4-0 win over Daake this season as well so he should move into rankings territory. Previously mentioned Smith from St. Paul is still putting together a solid season. Grant Lindsley from Shelby-Rising City had been out of action for over a month and came back and won the Schuyler Invite on Saturday.

160: #1 Long didn’t wrestle in the Thursday triangular. #2 Hull had a nice 7-0 win over #4 Ray. #3 Vodicka won the Cross County Invite with a 2-0 win over D#4 Soule, avenging an earlier season loss. #5 Jones didn’t compete because the Syracuse tournament was postponed due to weather. #6 Dozler won the Gibbon tournament in a hard fought 1-0 match over Hinrichs from Fillmore Central. Stanton’s Issiah Borgmann won Battle Creek with a win over fellow rankings contender Tinker from Pierce. Malcolm’s Adam Stewart finished 3rd at Schuyler and should get a crack at #5 Jones this Saturday. Centura’s Kile Bentley won the Palmer Invite and Sutton’s Dustin Stone won the Shelton Invite.

170: Congrats to Zach Borer of North Bend for setting the Class C career win record. He breaks former Husker All-American and 3x Nebraska State Champion Austin Wilson’s record of 181. Can he get to 200 wins this season? Two seasons ago he became the first sophomore in Nebraska history to reach 100 wins.

Borer won the Arlington Invite recording four falls. #2 Zoucha finished runner up to A#2 Huss at the Schuyler Invite. #4 Duda won over #4 McGinley 5-3 to avenge an earlier season OT loss. Duda also has the win over #6 Peterson from Chase County a few weeks ago. Peterson won his home invite with a 4-2 decision over Skinner from Ogallala. Zoucha has the 5-2 win over Duda so that justifies his #2 ranking. We could see Zoucha vs #5 Knott this weekend at the Louisville Invite.

182: Not to sound like a broken record but Reimers from Aquinas again had a dominating win over a top tier opponent. This time a tech fall over B#2 Frenzen. He has yet to go the distance this season, winning every match by pin or tech fall. #2 Brooks went 5-0 at the Gothenburg Duals. #3 Ulrich won the Gibbon Invite with two falls. #4 Allen won at Cross County and #5 Hawthorne dropped an 8-5 decision to D#3 Horejsi to finish runner-up at his home invite. Look for Bishop Neumann’s Luke Fairbanks to enter the rankings next week. After missing the first half of the season, he’s 11-0 and won by fall over #6 Booth to win at Arlington on Saturday.

195: #1 Fuchs wrestled up at 220 last weekend and won the Battle Creek Invite. Interestingly enough #3 @ 220 Austin Marx wrestled at 195 this week. #2 Wood didn’t wrestle last weekend. #3 Feldner won the Gibbon Invite. #4 Deinert won in UTB over A#4 Huber 4-2 and won by fall in the finals over rankings contender Schultz from Aquinas to capture the title at the Schuyler Invite. #5 Gay from Arlington won his home invite on Saturday and on Thursday wrestled up at 220 and won 10-5 over #5 @ 220 Bailey, handing Bailey his first loss of the season. #6 Fisher finished runner-up to D#1 Hunter at his home invite.

220: Top ranked Merten had three pins to win at Gibbon on Saturday. #2 Payne edged D#2 Hassett 2-1 to win a the Sandhills Knight Invite. That was his 3rd 1-point win and 4th overall win over Hassett this year. #3 Marx won at Battle Creek at 195. He’s been back and forth weights the last few weeks so it will be interesting to see where he ends up. He does have the win over #4 Bauers at High Plains last week. Bauers went 8-0 on Thursday and Friday in dual action with 7 pins and 1 forfeit win. #5 Bailey beat D#3 Cone 10-7 to win the Weeping Water Invite. #6 Simmons finished 1st at the Palmer Invite. Simmons and rankings contender Scheer could meet up this weekend at the LouPlatte Conference tournament.

285: #1 Moses pinned #4 Hoevet in 22 seconds to win the Gibbon Invite. #2 Hale won the Battle Creek Invite. #3 Drake beat B#6 Martinez 3-2 in UTB OT, a key match in his team’s 6-point win over Northwest. David City’s Ingwersen had a huge win by fall over #5 Schramm to help his team win their big dual over Aquinas on Thursday. #6 Gilpin won a Thursday dual match and Winnebago was idle over the weekend. Tyler Ohrman from Sutton won the Shelton Invite with a win by fall over D#6 Martin of Overton.