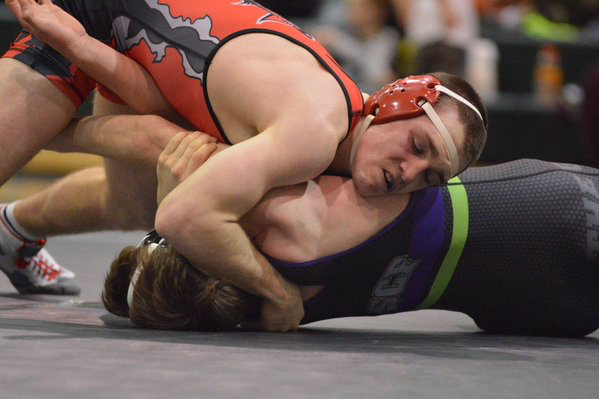 Going for FOUR
Cameron Riggs (Maxwell) Senior
Riggs competed his first 3 years of high school for North Platte St. Pats, Winning D113 as a freshman and D132 as a sophomore and junior. Riggs has scored bonus points in ever match except one at the state tournament in his career. That match was a 8-2 victory in the quarter finals his sophomore year. In his freshman state title run, he notched a 10-0 major decision in the finals to finish the season 44-0. As a sophomore, Riggs went 47-0 and earned a 17-5 major decision in the state finals. Last season, Riggs went 50-0 and pinned his way into the state finals before earning a 16-1 technical fall. Riggs comes to Omaha this season at 53-0 and a career record of 197-0.

Max Hughes (Syracuse) Senior
Hughes began his journey to four state titles at 106 in class B with a 4-2 overtime win his freshman year. His sophomore season Class C at 113, he captured the title by fall in a highly anticipated matchup with Evan Waddington. As a junior, a late drop in weight by Jeff Heinz prior to districts paved the way for one of the more highly anticipated semifinal matchups in Class C. Hughes controlled the match on his way to a third title. This season he and Waddington are again at the same weight and have split matches. His road to a fourth title will not be easy, but Hughes has risen to the occasion year after
year and will look to cement his legacy in Nebraska wrestling history with a fourth state title.

Derek Robb (Sidney) Senior
As a freshman, Robb ended his season with a 45-0 record earning 2 falls and 2 decisions en route to the B138 title. Robb moved up 2 weight classes and won the B152 title as a sophomore with a 40-1 record. At the state tournament, he collected 3 falls and a 17-4 major decision in the semis. He secured a fall in the last 4 seconds of his highly anticipated state finals match with Billy Higgins of Skutt Catholic. As a junior at B152, Robb finished 56-0 and pinned all 4 opponents at state, with none of them making it to the 3rd period. In order to win his fourth title this season, he’ll likely see Waverly Junior Kaleb Canoyer in the semifinals who he has never wrestled. In the finals, he coudl see Dalton Quandt of Grand Island Northwest who he beat 13-5 earlier in the season, or Tomas Margritz of Lexington who he pinned earlier this season, and in last year’s state finals match.

Jordan Kelber (Valentine) Senior
Kelber captured a state title as a freshman at 106. He and Hughes were at the same weight (113) in their sophomore seasons. Hughes won the weight and Waddington knocked off Kelber in the semifinals. Last year as a junior, Kelber defeated fellow undefeated wrestler Wyatt Allan in the finals 9-4 to capture his second state title. This season, Kelber may face yet another undefeated wrestler in the state finals in Pierce’s Cody Yawn.

Connor Laux (Hastings) Senior
As a freshman, Laux won the A106 state championship recording 3 decisions an a fall in the semifinals. His season record was 42-1. As a sophomore, he finished 4th and ended the season with a 41-4 in a loaded senior-heavy A120 bracket. As a junior, Laux used first round fall and three decisions to win the B132 title. Entering this state tournament, Laux sports a 42-3 record and should face Devon”Tae Gutierrez of Scottsbluff in the finals. Gutierrez beat Laux 3-1 in early January, so this should be an exciting match.

Devon Walker (Elm Creek) Senior
Walker brings a 39-5 season record to Omaha looking for his 3rd straight state title. After failing to qualify as a freshman, Walker went 53-5 as a sophomore and used a 7-4 decision to capture his 1st state title at D145. After missing time due to injury as a junior, Walker finished the season 20-0 and recorded a 9-8 decision to win his 2nd state title at D152.

Braiden Ruffin (North Platte) Senior
At the state tournament his freshman season, Ruffin finished 5th in a loaded A152 bracket. As a sophomore, he avenged 2 in-season losses in the finals and won 10-5 over the heavily favored Isaac Odell of Lincoln East. As a junior, Ruffin recorded a fall, a 14-8 decision, technical fall, and a fall in the A170 finals. Ruffin looks to win his 3rd title in the A170 bracket, and will have to go through undefeated Isaiah Alford who handed him a 12-2 loss earlier in the season. A semifinal win over Matt Sorich of Millard West would propel him into the finals.

On track for FOUR

Caleb Lazure (Skutt Catholic) Sophomore
Lazure won his first title at B106 scoring a major decision and fall in his first 2 matches, then winning in UTB in the semifinals and sudden victory in the finals. Lazure has since moved up to B113 and sports a 27-6 record heading into the state tournament. He’ll have a manageable road to the finals where he could face an undefeated opponent, either Jackson Nielsen of Blair or Bryce Brown of Hastings.

Gage Krolikowski (Valentine) Sophomore
Krolikowski finished off an undefeated freshman season last year by pinning his way through state. He has been dominant this year since dropping to 120, with his closest match being an 8-2 victory. He is the favorite heading into the state tournament and will look to keep his quest for four state titles alive.

Tyler Pawloski (Pleasanton) Junior
Pawloski is looking for his 3rd state title this weekend in Omaha. As a freshman at 120, he capped off a 35-2 season with a 9-4 win in sudden victory to capture a state title. Last season, Pawloski won D126. He used 3 falls to get into the finals before winning another nail biter 4-3 over Joel Ostrom of Burwell and capturing his 2nd state title. Pawloski enters in this year’s state tournament at 47-0 and a career record of 128-3.

James Burks (Omaha Burke) Junior
Burks owns a 43-3 season record, and is seeking his 3rd state title this weekend in the A160 weight class. As a sophomore at 145A, he recorded 3 falls and a 6-3 decision en route to his second title. For his first title, he accrued 2 falls and 2 decisions including an emotional 5-3 win over his brother Otis Rollins in the A132 state finals. In order to win a 3rd title, he’ll likely have to face Isaac Trumble of Millard South who he has a 1-2 record against this season, or Gretna senior Cody Everhart in the finals.