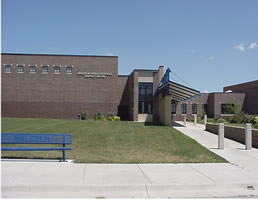 Team favorite David City has beaten both Central City and Sutton in tournaments this season already. The Scouts have eight projected qualifiers with at least three others capable of making the trip to Omaha. They have been ranked as high as #2 this season and given how close the top teams are in C should still be eyeing a state title. Central City continues to gain momentum as the season progresses and appear to have the top-end talent and depth to finish second in the district and make a run at qualifying for state duals. Sutton also has seven projected qualifiers and could put the heat on Central City for a runner-up finish.

Louisville was missing a wrestler and wasn’t too far behind Sutton in their home invite recently. They could possibly make a push toward the top three. Top ten team Crofton/Bloomfield is better suited for the state tournament.

106:
An exciting weight to kick things off in the C1 district with the top two in class C. Zoucha appears to be rounding into form at 106 after dropping from 113 a few weeks ago. Kunz has just one loss on his freshman campaign to D#1 Russell. The bottom two qualifying spots seem to be pretty close between four wrestlers. Krause form David City has a 1-point win over Turman from SCNU#5.

113:
Styskal is a clear favorite as he has a head to head win by pin over the likely 2 nd seed Schmit. Schmit has been solid this year and has a win over Ruffner from Conestoga. After Ruffner the only other seedable wrestler at this point in time is Schutte from SCNU#5. Overall probably the weight with the least depth
in the district.

120:
Lee Carlson has yet to lose to a class C opponent this season. After Carlson, this weight becomes difficult to predict. Schneiderheinz has beaten Barlean head to head, but suffered a loss to Monroe, which may affect seeding. If Monroe can get to a winning record, then he could find himself as the 2nd seed based
on his win over Schneiderheinz. However, Schneiderheinz has been knocking off a ton of good competition lately and looks to be in good shape to make the finals. Kruntorad has recently made the descent to 120 and has a good shot a top four finish. Barlean has spent more time as the starter at 120 this season but Harris has performed well in his absence for David City.

126:
Styskal and Brandenburg recently met and Styskal won by fall. Styskal also owns a win over Hinrichs, who has two early-season wins over returning state qualifier Devries. Hinrichs and Brandenburg haven’t met this season, and would be a great semifinal matchup. This weight is one of the few in this district
where the top four appear to be clear cut.

Yawn and Valentine have yet to meet this season, but Yawn does have the better record and common opponent. Valentine and Green have beaten returning state qualifier Tejeda head to head. Valentine has also beaten Carlson while Green has a common opponent over him so that may push Carlson to the fourth seed. Should be two tough quarterfinal matches at this weight as McFarland should have a shot
at qualifying as well as he has a common opponent over Tejeda. From what I can tell there are four relatively evenly matched wrestlers vying for the 3rd and 4th spots.

138:
White is having a fantastic junior campaign with only one loss to a class C opponent in three-time state champ Hughes. White was winning the match before being rolled to his back and pinned late in the match. He should be a heavy favorite to navigate the C1 district as there are no other ranked wrestlers
in the field. Schleis has spent most of the season wrestling 145 and 152, so it was surprising when he surfaced at 138 and knocked off Hogue 2-1. Hogue has enough quality wins to be ranked and will likely get another shot at Schleis in the district semifinals. Hogue and Moore both have common opponent over Carlson from Sutton, so based on record Hogue looks to be third seed and Moore fourth.

145:
Hernandez returned to the lineup for the second part of the season, so he has a limited number of matches thus far. Gallion has some impressive wins this season and wrestled Hernandez well, which proves he’s ready to make a run at the district finals. Stone is on the same track as Gallion by beating people he lost two earlier in the year and notching some impressive victories. Tinker has been having a ton of success down at 145. Lindsley hasn’t competed since before the holiday break, but is a good bet to be the five seed if he’s in the lineup come districts.

152:
Warner and Stone are both former medalists in Omaha and part of one of the most wide-open weights in class C this year. Both likely have their sights set on a state championship. They’ve met twice this year with Warner winning on both occasions. Vodicka and Zoucha have split matches this season which in turn gives Wegrzyn common opponent over Vodicka by way of his win over Zoucha. Zoucha and Vodicka have both beaten Lee from Central City. Stone has beaten Wegrzyn by fall. The recent decent of Haskell to 152 makes this perhaps the toughest weight in C1. Also going to monitor this weight to see if Janssen from Crofton drops to 152, where he would be both a district and state title contender. There will be
some huge quarterfinal matches on Friday.

160:
Schneiderheinz has beaten Janssen head to head this season. That will likely earn him top seed. Jones has a head to head win over Griess by an 11-4 score. Griess has a 4-3 win over returning state qualifier Flack. Wonder if Griess or Flack decide to try their hand at 170 for districts as it looks like their teams do not have wrestlers at the weight above. Thinking that since Haskell is at 152 that perhaps Montenegro will be back at 160 where he started the season. Once again keep an eye on Janssen who may be down to 152 before districts.

182:
Looks like a great finals match in store, with two of the top challengers to Reimers at 182. Poppe has only one in-state loss to D#3 Duffy. He will have a stern test in Deinert who has just two losses on the season to the top ranked A and D wrestlers. Deinert has a common opponent over Spitz and a head to head win over Schwaninger. Schwaninger and Adams have split matches and will likely battle in the quarterfinals. Spitz is the wildcard here as he doesn’t appear to have any common opponent to separate him, so if his record holds up he should be the third seed.

195:
Possible ranked battle for the district title could be in store. However, Fuchs has recently wrestled 220. He could get a look at David City’s Eilers at Boone Central which could dictate which weight he decides to compete at. Fuchs has common opponent over Schluckebier and that will probably make the difference in seeding, but regardless they will likely meet up in the finals. Should be a battle for the other two spots between several wrestlers. Rademacher has common opponent over Gonzales. Gonzales has a close win over Moore. Kramer has a head to head win over Wendland in OT.

220:
Eilers and Carlson have met this year with Eilers winning by fall. They appear to be headed for a rematch in the district finals as it looks like Carlson will be competing at 220 for the rest of the year after splitting time at 195 earlier this season. Eilers has common opponent over Giles, who has had a great season so far this year. Giles will likely be the third seed based on his head to head win over Hornback. The last spot at this weight is up for grabs. Johnson from Madison had an upset win over Giles, but has also lost to him once. Hornback has pinned Kuehler twice and lost by fall once. Hornback also wrestled 285 last week and knocked off a rated class D wrestler. Shuck of SCNU#5 has a winning record and may jump Kuehler for that reason.

285:
Rempe and Shumaker should square off in the finals. Rempe has a common opponent over Shumaker and is set to be the top seed. Shumaker has beaten both Faulks and Ohrman head to head this year. Faulks has a win over Ohrman and Ohrman has beaten Ingwersen head to head twice. Powels has a common opponent over Ohrman, but has a losing record. Another weight where the top few wrestlers appear to be separated from the field with several vying for the 3rd and 4th spots.