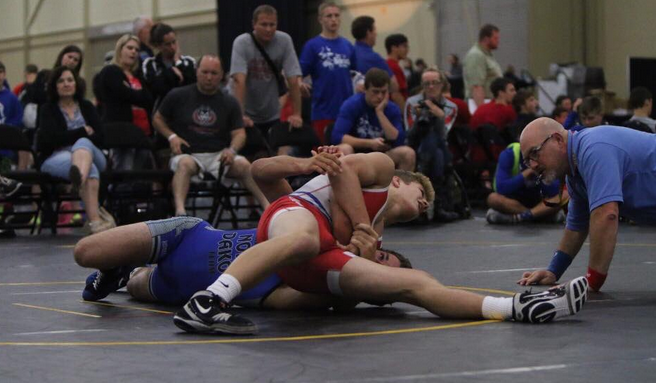 After debuting in the national rankings, we got the opportunity to catch up with Omaha-Skutt’s Billy Higgins.

NE Wrestle: After having to forfeit out of the state tournament as a freshman, how did it feel being able to compete and getting on the podium last year?

Billy Higgins: It was really cool to finally be able to go out and wrestle and compete even though I fell short of my goal.

You were runner-up this past season at the state tournament, how much has that finals loss gone into your summer motivation?

I was really bummed out after the state tournament and almost didn’t wrestle this summer. My coach, Zac Dominguez, finally convinced me. So I decided if I was going to do it, I’d go all out.

You have had a pretty great summer making the Junior Duals All-American team and earning All-American honors at Greco nationals. How would you describe your summer?

It was overall a pretty successful summer. There are some matches and tournaments I’d like another crack at, but I’m pretty satisfied with how everything went.

You are now nationally ranked by TOM at 152, what was that feeling like seeing your name as one of the best wrestlers in the entire country?

It was really cool. It’s been my goal for a long time to be nationally ranked, but I want to go higher than 17.

What would you attribute as the biggest reason that you are now ranked?

All the work my Coach Zac Dominguez has done with me and to my parents who provided me the opportunity to wrestle and travel all over the country.

Starting your junior season are there any colleges you are currently looking into?

Some schools that I have on my list are the University of Northern Colorado, Purdue, Augastana University, Nebraska, and Maryland.

What are you goals for this season?

My goals for my junior year are to finish the year ranked in the top 10 and to fulfill my dream of becoming a state champion.

Higgins also added at the end of the interview, “I’d like to thank my parents, my coaches Zac Dominguez and Chas Devetter, and my school for giving me such a great place to wrestle.”

Catching up with Nebraska’s Tyler Berger