Team Breakdown:
Four total top three teams from Classes A and C highlight the 21 team field. A#2 Lincoln East and A#3 Columbus have the depth needed to finish as the top two teams. C#1 Valentine and C#2 David City should have a battle for third place while being pushed by Class B teams Adams Central and Wahoo should make a push towards the top as well. There are teams from all four classes competing and TONS of individual talent.

Individual Weight Breakdown:
There are over SIXTY ranked wrestlers in the field. Preseeds are listed for each weight. These are just preliminary so expect some changes prior to the start of the tournament. Friday wrestlers are divided up into four separate pools with a max of six wrestlers per pool. They wrestle round robin and the top two from each pool advance to the championship bracket on Saturday.

Pools are set with the following seeds: 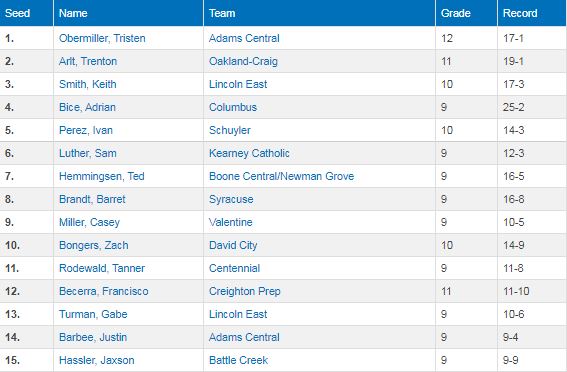 Six ranked wrestlers (three in the top two) make this a great weight to kick things off. Smith has beaten Bice head to head this season by a score of 7-2. Obermiller from Adams Central has had success at this tournament in the past (see last year’s win over 2x SC Williams), and will look to get back on track after his first defeat of the season. Arlt made it down from 113 where he enters the rankings at #1 in Class C. Obermiller and Bice appears to be a likely semifinal match on Saturday with Arlt and Smith as the other based on the seeds. Smith is the tournament favorite heading in, but it will be a very entertaining weight with a lot of young talent.

Baustert has been fantastic this season and is the heavy favorite at this weight. Adams Central’s standout freshman Kort has only one loss on the season to unbeaten A#5 Salat. Dozler and Cerny have had phenomenal seasons as well and could both make the finals to wrestle Baustert. Syracuse’s Bridgmon is a returning state medalist. Valentine freshman Lamb could make a statement with a win over any of the prior listed opponents. 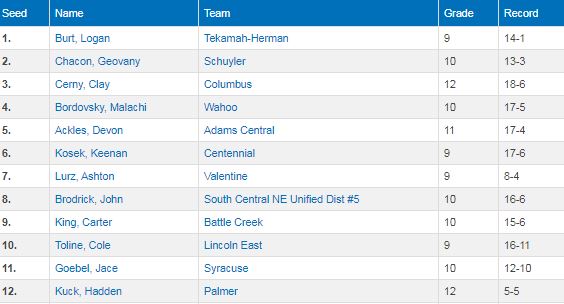 What this weight is lacking in top ranked wrestlers, it certainly makes up for in depth. Five ranked wrestlers plus two additional qualifiers. Cerny is the favorite, but any mix of the rest of the wrestlers wouldn’t be surprising. Three of the state’s best freshman at 120 will be on the mat: Burt, Lurz and Toline. King from Battle Creek is one to watch as he just made the drop from 126 and had a statement win a week ago against a returning state medalist. 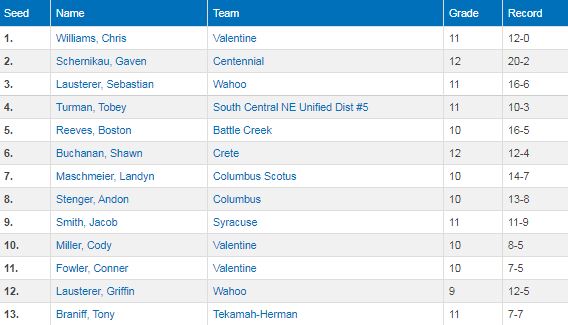 2x champ Williams highlights this weight. D#2 Schernikau has a head to head win over B#3 Buchanan. Four other returning qualifiers should make for some entertaining pool quarterfinal matches on Saturday.

One of the coolest things about this tournament is the blend of wrestlers from different classes. We could see D#1 vs A#2 at this weight. There are four ranked wrestlers from Class C as well.

Three out of the top four wrestlers in Class C entered here, including #1 Krolikowski. Kort for Adams Central rounds out an extremely solid top four.

C#1 McGinley and A#2 Sperling should be an exciting match if they meet up. McGinley has a close win over C#4 Valentine this year. 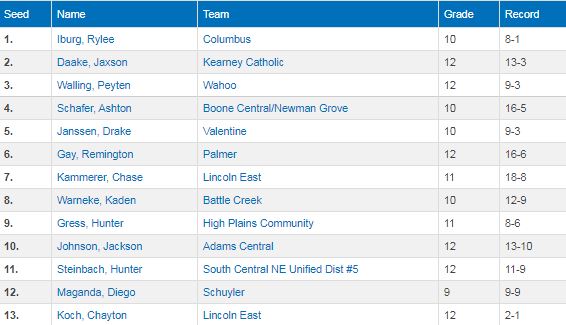 With Mayfield moving up to 160, this weight becomes the oddball weight of the tournament with only one ranked wrestler. However, weights like this can play a big factor in team races. Columbus and Lincoln East both have solid wrestlers at this weight. Janssen has been wrestling well for Valentine and there is no shortage of winning records. Should be a fun and unpredictable weight.

Possible battle of undefeateds with A#1 Mayfield and C#1 Olson. Shanahan could play spoiler in a likely semifinal match on Saturday against Olson.

SIX top two wrestlers. Brandt and Hancock will be in the same pool on Friday if the seeds hold. #2C vs #2B. What an absolutely loaded weight class. This one will be tough to predict, but Vodicka does have wins over Standley and Soule. He could meet A#1 Lyman in the semifinals on Saturday.

DeAnda has been battle tested all season and should be considered the favorite to emerge with the tournament title at 182. He’ll be tested right away as A#5 Lankas will likely be in the same pool. Pretty clear top 8 and barring any upsets they will be your final bracket for Saturday.

Alongside 170 this one will be one of the best weights to watch at the tournament, especially on Saturday for the semifinals and finals. Something will have to give as we have three unbeatens in Grape, Pray and Bordovsky.

Cone and Moore are two of Class C’s best. Moore will likely see Deckert of Adams Central in Saturday’s semifinals. Deckert has been under the radar on his way to a 16-1 record.

Simonson should get the top seed, but there are a number of potential champs at this weight. Four sophomores in the top seven.